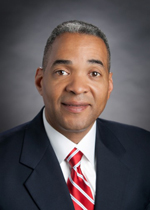 DETROIT — Clark Hill Attorney Reginald Turner has been selected as the recipient of the National Bar Association’s prestigious “Outside Counsel of the Year” award.  Turner will receive the award during the NBA’s annual meeting in Miami on July 30. Turner was selected, in part, due to his work in defending class action cases that have saved clients tens of millions of dollars in damages, as well as his pro bono publico service to the NBA and the community.

“I’m very honored to have been selected for this award,” said Turner. “I would like to thank the NBA Commercial Law Section for choosing me, and I also thank my colleagues at Clark Hill, without whom, the accomplishments which led to my selection would not have been possible.”

Turner is a member in Clark Hill’s Detroit office, where he practices in both the Government and Public Affairs Group, as well as the Labor and Employment Group. He is a past president of the National Bar Association, the State Bar of Michigan, and the Barristers of the Detroit Metropolitan Bar Association.