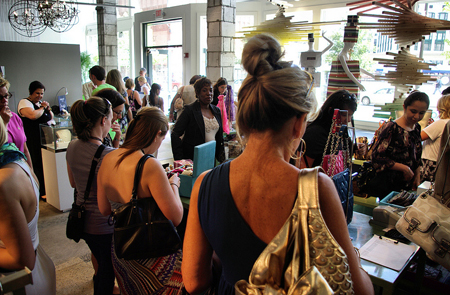 DETROIT —The Somerset Collection’s celebrated CityLoft and The Detroit Shoppe pop-up retail stores will reopen in Downtown Detroit on Friday through Aug. 24. CityLoft will feature nearly 40 pop-up shops from the Somerset Collection’s luxury retail partners and notable brands. New retailers this year include 7 for All Mankind and L.K. Bennett, among others.The Detroit Shoppe carries merchandise from Detroit’s most iconic brands and celebrated institutions, and 100 percent of the proceeds benefit local charities. The stores’ hours are Tuesday to Saturday, 11 a.m.-7 p.m.

Every Thursday at CityLoft, guests can buy coneys, Faygo pop and Better Made chips for $5. Every penny from food sales benefits Summer in the City and the Boll Family YMCA. CityLoft and The Detroit Shoppe rejoin Moosejaw, which opened as a temporary store last fall and during the 2012 holiday season. Due to popular demand, Moosejaw now has a multi-year lease with Bedrock Real Estate Services.

CityLoft is at 1261 Woodward between Grand River and State and The Detroit Shoppe is at 1201 Woodward at the corner of Woodward and State.