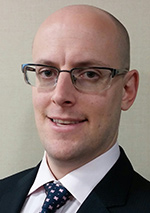 Previously, Franco was a portfolio manager at Flexible Plan Investments in Bloomfield Hills. He has held  in similar positions at Oppenheimer & Co. in New York and Northpointe Capital in Troy.

Franco of  Ann Arbor, earned his Bachelor of Science  and Master of Science in industrial engineering at the University of Michigan.