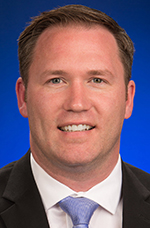 Dustin Hoff has been named an an associate at Southfield-based Christensen Law.

Hoff, of Clawson, previously worked for a general practice law firm in his hometown of Sandusky. He volunteers the Blue Water Center for Independent Living, a disability rights organization. He has worked on several political campaigns for candidates running for the Michigan House, Senate and Supreme Court.

He earned  a bachelor’s degree in political science and history at Saginaw Valley State College and his juris doctor from Western Michigan University Cooley Law School in Lansing.