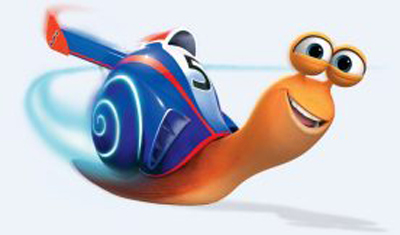 The collaboration between Chevrolet and DreamWorks Animation will engage fans in the U.S. and select international markets and serve to enhance the film’s authentic racing environment.
As part of this alliance, Chevrolet has created a special real-life replica of a custom Camaro featured in Turbo. The comprehensive campaign also includes television, print, and online advertising, a social media push and dealership activations in key markets.

Chevrolet design consulted with DreamWorks on the animated versions of the Camaro and the Chevrolet-powered Indy cars that appear in the film, which premiers in the U.S. on July 17. Turbo marks the first time DreamWorks Animation has partnered with brands in this way.

Chevrolet plays an integral part in two of the film’s key moments. Turbo receives his speed after an encounter with a Chevrolet Camaro and later, the Chevrolet “bowtie” logo features prominently in scenes set at the Indianapolis 500.  Mirroring the film, the Chevrolet logo will be featured prominently at the race this weekend.

“Turbo is one of the most anticipated films of the summer, and we couldn’t be more excited about this collaboration, which aligns perfectly with Chevrolet’s renewed presence in INDYCAR,” said Tim Mahoney, chief marketing officer, Chevrolet. “Millions of future drivers will be inspired by Turbo to realize their dreams both big and small.”

Said DreamWorks Animation’s Chief Marketing Officer Anne Globe: “In a film about a slow snail who dreams of being fast, who better than Chevrolet to give our hero his first taste of high-speed driving on the open road? Our relationship with Chevrolet both onscreen and at the Indy 500 is a natural fit that adds a layer of authenticity to this wild ride of a story.”

A real-life replica of the Chevrolet Camaro from the film has appeared at auto shows and events across the U.S., giving viewers a first glimpse of what to expect in the movie. Chevrolet will also feature Turbo in advertising leading up to the release. The ads will wrap the movie’s theme of realizing dreams around Chevrolet’s “Find New Roads” brand platform.

The larger campaign also includes ad integrations in television and print for Chevrolet’s Traverse; a 30-second custom animated television spot, which will be translated into a variety of languages for specific international markets, and a social media push and activations at select dealerships as the movie rolls out around the globe.  Chevrolet’s international activation plans vary by market.