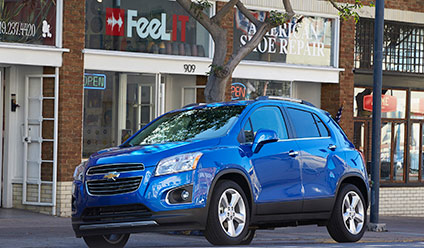 Twenty social media “influencers” will create a “social swarm,” using a mix of paid media, social media and unique experiences —conveying the versatile personality and capabilities of the all-new Trax in Chicago and New York.

Following personalized itineraries, each participant is tasked with sharing their city discoveries one may not otherwise find, including venues and activities like live music in a small club, trampoline training, a butchery demo and a distillery tour.

“Trax is the perfect small SUV for urban discovery,” says Steve Majoros, Chevrolet director of marketing for cars and crossovers. “With its car-like maneuverability and SUV capability, in addition to OnStar 4G LTE with a built-in Wi-Fi hotspot, Trax gives you the tools to discover and share what the city has to offer.”

In addition to live curated content from participating social influencers, a series of three long-form videos focusing on secrets in Los Angeles, New York and Chicago will be created as well with in-depth looks into restaurants, cafés, nightlife, and experiences of which even locals may be ignorant.

Lifestyle and fashion blogger Megan Collins, known as the Style Girlfriend, will host meet and greets with top city influencers, experiencing the city through local eyes.

The Hidden Gems campaign begins Saturday and continues through the summer.