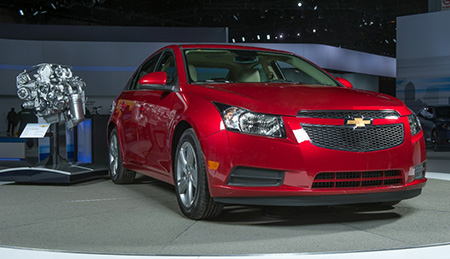 Unlike the muscle car era, Cruze Diesel marries that quick burst to a segment-leading EPA-estimated 46 mpg highway, and demonstrated range of 717 miles on one tank of fuel.

“Overboost provides increased performance when the driver demands it, like when passing on the highway,” Mike Siegrist said, GM 2.0L diesel assistant chief engineer. “When the driver leans on the throttle, the turbocharger increases the air and fuel intake over and above what the engine needs for normal torque demand.”

So taking the “muscle” analogy one step further, overboost is to Cruze Diesel as oxidation is to athletes when their muscles use oxygen to break down carbohydrates, fat and protein to produce energy. The more oxygen they take in, the better their performance. Cruze Diesel can sprint from 0 to 60 in about 8.6 seconds — half a second faster than its chief competitor, the 2013 Volkswagen Jetta 2.0L TDI.

Cruze’s 2.0L turbo-diesel provides greater fuel economy than a comparably sized gasoline engine through greater thermal efficiency, a higher compression ratio and an unthrottled combustion process. It features an iron cylinder block and a forged steel crankshaft, each designed to stand up to the greater cylinder pressures that come with a turbo-diesel engine.

A lightweight aluminum cylinder head and aluminum intake manifold contribute to the engine’s ability to deliver balanced ride and handling.

Turbocharging is an increasingly popular choice with automakers and car buyers. According to LMC Automotive, a provider of automotive forecasts, turbo-charged passenger vehicle production in North America is expected to double by 2018, from 14 percent in 2013 to 29 percent, mainly due to increased diesel production, as well as four-cylinder turbo gas engines replacing V6 engines.

“Cruze’s turbo-diesel engine is powerful, efficient and clean,” Siegrist said. “It will change perceptions of what a diesel car can be while giving customers another fuel-efficient choice in the Chevrolet lineup.”