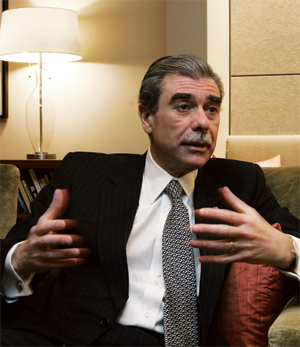 What would you suggest that Michigan can do to get out of its now, I would say five-year recession, especially as the Detroit Three automakers strive to improve sales in a very challenged U.S. market?

I don’t want to imply that these are easy decisions or that I have any solutions that the governor and others may not have, but what we’ve seen around the country — states that have been able to rebound … We’re seeing a lot of partnerships between state government, academia, and private sector — innovation partnerships in universities. Things like that that eventually end up becoming small businesses or attracting engineers and things of that nature. We know that Michigan graduates a lot of good, solid engineers; the problem is that they go and work in other states. So creating those jobs in the state, I think, is absolutely critical. Keeping taxes low, keeping regulations friendly for businesses, attracting investment … I’ve seen a lot of outreach and a lot of the good campaigns going on in Michigan. So that’s all going in the right direction, but as we know, it’s all going to be down to results and how many companies do come in …

A lot of our money that would go into other forms of purchases — other business, if you will — is going into our gas tanks right now. Do you think we, as Americans, have to become accustomed to gas prices above $4 a gallon? Do you think the addition of ethanol, biofuels, and hybrids will drive down gasoline prices and energy prices over time?

Over time, yes, that will help. In the meantime, as China continues to add automobiles and they continue to grow, and [as] India grows with the rest of the world, the demand for gas will grow and that’s really our problem. So we have two choices: We either increase supply or reduce demand. And one thing the president has been talking about is we can produce more oil while these new technologies come onstream — because clearly the future is new technology. But while that happens, we can do a lot of good by producing more of our own oil. We have a lot of oil; we have oil in Alaska, and we have oil in the gulfs — the Gulf of Mexico, our shores, each of our coasts. If we’re asking the rest of the world to produce more oil, we should be willing to do it ourselves. And we haven’t done that in a long time. We haven’t built a nuclear reactor in over 30 years; we haven’t built a new refinery in over 20 years. We just approved for the first time in 25 years a new gas terminal in 2003. So we need to talk less about what we need to do and actually do it. But there are a lot of things we have not done. We haven’t been able to get the Congress to come to a consensus to get enough votes. Yes, we’re concerned about our environment … but I think today it’s false to say it’s either one or the other. You can do both, but do something and get on with it.

Privatization, of course, is a big local decision. Generally speaking … what we’ve seen is that when the private sector invests money, they have no choice but to invest it in a way that they get a return. And government doesn’t always have that pressure; that’s why we believe that our taxes are still too high. Our corporate tax rate is among the highest in the world; we want to attract foreign companies to invest in our country, but we’re not helping ourselves by keeping our corporate tax rates so high. The whole idea there is [to] put more money in the hands of the private sector as opposed to [the] public sector because they’ll invest it in a return, and ultimately our economy is only as good as how we all allocate capital. And the private sector and consumers have [proved] that, over time, they do a better job than the federal government.

We’ve had four years in a row of export growth above 10 percent, and last year we had $1.6 trillion of exports, so our exports grew almost 13 percent. This year, they’re up about 18 percent [as of early August]. So our strategy, in terms of the trade deficit, is to close it by increasing exports, as opposed to [closing] it by restricting imports, because that ultimately gets us in what I would call the Smoot-Hawley syndrome — we try to help ourselves by cutting imports, but the rest of the world retaliates, and they cut our exports.

And we have a lot of jobs that rely on exports. I think in Michigan, 6.5 percent of all jobs are directly related to exports, so we shouldn’t cut the deficit by limiting imports. There are countries around the world, such as Germany, with a trade surplus, but they have 8.5 percent unemployment. So I think we’ve got to look at those numbers in the context of everything else and focus on exports. Detroit happens to be the fifth-largest metro area for exports in the country. … The way to reduce the trade deficit is by exporting more, not by restricting our imports, because that invariably gets us into protectionism, and it gets us into a mode of retaliatory trade relationships around the world because if we restrict people’s imports, they’ll restrict ours. And that’s not good.

No question about it. Exports today are the highest they’ve ever been as a percentage of our economy. It’s almost 12.6 percent of our economy. We’re exporting more than ever before; more companies are exporting more than ever before. We have a record in capital goods. In autos, we have a record — whether it’s auto parts, trucks, cars … 2007 was a record. [In] our most recent month, we had a record, so this is a good time for exports. And exports right now are the bright spot in our economy, so we should be doing everything we can. We have three pending trade agreements in Congress. One would really be big; the biggest one is Korea. And that would improve our ability to enter that market with our autos. But Congress is just sitting on them because this happens to be an election year, and trade is controversial. So at a time when we need these agreements, unfortunately, Congress is sort of standing still until we figure out what’s going to happen with the elections, and then maybe we’ll be able to get these for a vote.

Does the North American Free Trade Agreement need to be modified, and if you think so, what recommendations would you have for improving it?

Well, NAFTA was 14 years ago, and in the meantime, we’ve added some environmental and labor provisions, and those are potential improvements, but I would not … recommend opening up NAFTA and renegotiating. I think it’s a very bad idea because we’re not the only ones with points that we would renegotiate. And we would just be opening up something that I think we would regret over time. NAFTA is a $1-trillion relationship. If you look at numbers 14 years before NAFTA and the 14 years after NAFTA, just about every number you look at is better in the 14 years after NAFTA. It’s one-third of our trade. Companies have integrated supply chains; they’ve integrated computer systems. I think it would be a mistake to send a word to our partners after 14 years that we’re having cold feet and second thoughts and we want to renegotiate. I think we can improve it; we can make it better, which is really what we’re trying to do with something we call the Security Prosperity Partnership. But [I don’t favor reopening NAFTA]; I think that would be a mistake.

You played a key role in the passage of CAFTA-DR, which eliminated trade barriers and provided a boost to export opportunities in Latin America. Are you satisfied with the results today?

CAFTA has been a great free-trade agreement. This encompasses five countries in Central America, plus the Dominican Republic. And just to give you an idea — these are pretty small countries, but we do $45 billion of two-way trade. And it’s a great example of how these agreements work. All of Central America’s exports were coming into the U.S. duty-free under the Caribbean Basin Initiative that we put in place in the 1980s. Our exports were paying a duty going into Central America. CAFTA leveled the playing field and took out the duties for our exports, so we went from a trade deficit to a trade surplus in almost a year. And it’s growing. They’re happy, our exporters are happy, and it’s just a great example of how these free-trade agreements work for us.

As a native of Cuba, do you foresee the day when the Cuban people are free from the dictatorship? And once independence happens, there’s got to be some wonderful opportunities for economic growth in Cuba and great commerce with the United States.

Absolutely. And it’s been 49 years of a very destructive dictatorship. And, once again, it’s proof that communism just does not work and it’s one big failure. So there’s a lot to rebuild. But, of course, they still have to get through the political transition. It’s a very brutal dictatorship; there are political prisoners in jail, there’s a great deal of brutality to [maintain] control of the population. So once Fidel [Castro] goes, we’ll see how Raul [Castro] manages; I don’t think he’ll be able to keep it together. I think it’ll be a big challenge for him to do that. But it will happen gradually.

Do we know who might come after Raul [Castro]?

Well, no; there are several options. A lot of the people surrounding Raul are in their 70s, 80s. So [they’re] very conservative and very tied to the system. There are a couple of younger people but, you know, there are always purges and competition in that group. That’s a very important question: What happens after Raul? And I think that’s when the real changes will accelerate. They have to, because the Cuban people cannot put up with it anymore; there’s no reason to put up with it.

Just between us, do you enjoy a fine Cuban cigar from time to time?

I used to smoke cigars, [but] I’ve actually stopped. But, yes, in past days I would enjoy a cigar generically.

Let me ask it in a different way, then. Are you able to, you know, for maybe a friend in radio, legally bring them back from Cuba?

No, I’d get myself in a lot of trouble. First of all, I never go to Cuba. But the Dominican Republic, Honduras — free enterprise has taken hold, and you can get just as good cigars in Central America.

Fabulous cigars. Actually, I hate to say this, given your heritage, but even better cigars than many Cubans today. Because a lot of those folks escaped and left Cuba. And they went to these other places and make fabulous cigars.

And they’re doing it for incentives. They’re doing it to work hard and, again, the free-enterprise system is taking over. In Cuba, it doesn’t matter if they make 10 or five; they still get paid the same thing. There’s no incentive and no innovation. Let’s stick to the Dominicans and Honduran cigars; they’re just as good.

Do you have any plans after President Bush leaves office in January?

At this point, I haven’t even started entertaining that because you get into situations of conflicts and what have you, so after the elections I’ll probably start thinking about that. At this point, I’d probably say I’d go back to the private sector, which is what I know how to do. This has been the greatest thing I’ve ever done in my life; it’s been a wonderful experience.