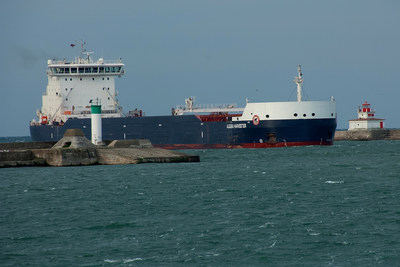 The new Equinox vessels will have all of the features of the existing Equinox design, including the exhaust gas scrubber technology pioneered by Algoma on the Great Lakes in its first Equinox Class gearless bulk carriers. The first vessel is scheduled for delivery in early 2018 with the balance of the ships delivered by the end of that year. Algoma is continuing discussions with other parties on further fleet renewal opportunities.

The contracts, which are with Uljanik d.d. of Croatia, replace three of the contracts with a Chinese shipyard that were canceled earlier this year.

“Our experience with the Uljanik Group on the Equinox 650 Class project has given us confidence in the shipyard’s ability to deliver high quality vessels on the agreed timelines,” says Ken Bloch Soerensen, president and CEO of Algoma. “Our Equinox project has faced significant delays as a result of the financial problems encountered by Nantong Mingde shipyard. Working closely with Uljanik, we are confident in the continuation of Algoma’s fleet renewal project.”