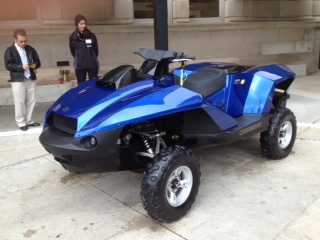 AUBURN HILLS — It’s not often the push of a button is preceded by two million man-hours and a $200-million investment. A revolution in land marine vehicles, Gibbs Sports Amphibians in Auburn Hills is launching its Quadski in November, the first high-speed personal sports amphibious vehicle.

Amphibious vehicles are “the biggest evolution of the automobile since the Model-T,” says Alan Gibbs, founder of the company.

The Quadski, which looks similar to a wave runner, can be driven on both land and water (once in the water, the wheel fold up with the push of a button).

The single-seat vehicle contains two hidden storage compartments: one in front of the steering column and the other behind the seat.

“Over the next six months, we will be releasing some accessories to go along with the Quadski,” says Neil Jenkins, chairman of Gibbs.

Gibbs expects 1,000 units to be sold within the first year. The technology is something that Porsche, GM, and Ford have attempted. But the fastest time was 8 mph on water. The Quadski can reach 45 mph on land or water.

The Quadski’s sales price is $40,000. In late 2013, the company projects the vehicle will be sold in some 20 to 30 motorsports dealerships around the country. It is also available online at www.gibbssports.com.

A single tank of gas is good for more than two hours on water, or 370 miles on land. Alan Gibbs expects the Quadski to be of interest to “someone who likes to have a lot of fun.”

Plans for multi-passenger versions of the amphibian are already in the works, including one that features side-by-side seating.

The Quadski will be available exclusively in the U.S. for the first year, and then it will be available worldwide in 2014. Most states require a state license to operate the Quadski, which may include both marine and off-road designations.

Gibbs came up with the idea for amphibious vehicles 18 years ago when he was launching a boat on his farm in New Zealand. Because the boat was too heavy, Gibbs found it easier to add wheels to the boat. “If I needed one, then others did too,” Gibbs says.

While maintaining his 1,000-acre farm in New Zealand, Gibbs moved to Detroit in 1997. He developed the Aquata, his first amphibious vehicle, in the United Kingdom.

According to Jenkins, this new section in the transport industry takes away the barrier between land and water. “You will no longer have to stop and changes vehicles,” he says.

The company returned to Detroit in 2007 to be at the center of the worldwide automotive industry. “There’s a huge talent pool and every supplier has a representative in the area,” Jenkins says.

Based in Auburn Hills, Gibbs has more than 100 employees between two separate facilities. Over the next couple of years, the company expects to add upwards of 200 additional workers.