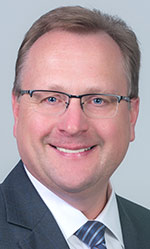 Brosseau, of Troy, has been with Brose for mor than 15 years, most recently serving as global vice president of the Ford business unit. In his new role, he is responsible for the expansion of Brose’s presence in North America and will focus on achieving objectives related to financial earnings and quality in the region.

Brosseau joined Brose in 1999 as customer team director for North America, later advancing to multiple sales positions for key accounts, including Ford and Chrysler. As global vice president of the Ford business unit, he led the acquisition and launch of door and latching systems while managing the North American Electric Motor Drives team. Under Brosseau’s leadership, Brose’s global share of the Ford door and latching systems business nearly doubled.

Brosseau earned his bachelor’s degree in mechanical engineering from Kettering University, and completed his master’s degree in business administration at the University of Detroit Mercy. He is a member of the Original Equipment Suppliers Association CEO Council.