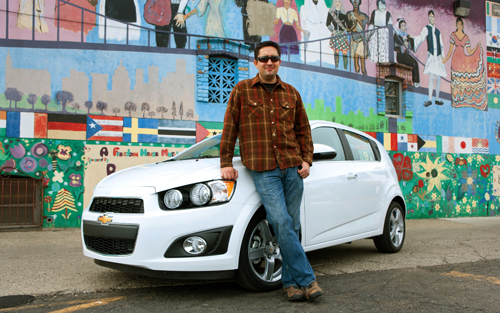 The self described “big shot intern,” promised his grandmother that he would buy her whole block in southwest Detroit and fix the city one day. For the past two years, the now 33-year-old engineer from General Motors has been making good on that promise.

Joaquin Nuño-Whelan’s passion extends beyond building cars. He created an outlet for his zeal to rebuild Detroit in 2009 when he founded Green Place Detroit, a non-profit that has since partnered with students from Cesar Chavez Academy on the city’s southwest side to build an urban garden and design and build an “eco-house” project.

“(We thought) let’s teach kids how to do it so that they become the leaders that take back their community and do the same thing that we were doing with [existing] science and engineering programs in Detroit,” Whelan says. “That’s where the idea for Green Place Detroit came from.”

The Urban Garden project was completed in spring 2011 through the collaborative efforts of Green Place members and Cesar Chavez students. Green Place obtained a land grant for two adjoining lots in southwest Detroit from the Michigan Land Bank, which aims to return blighted properties back to economically viable use. Selected both for its close proximity to the school, and Whelan’s own ties to the neighborhood, the garden and future site of the eco-house are located at 1296 Rademacher.

To obtain the plants and skill set needed to create an urban garden, the organization tapped the Greening of Detroit, which has 1,500 urban gardens in the greater Detroit area. The new 40×40 patch of tilled soil is beginning to resemble the produce section of the grocery store as the crops ripen. Maintenance of the garden is being left to the students of Cesar Chavez Academy and residents of the neighborhood. “We’re kind of letting them own it and decide (whether to) really be a part of it,” Whelan says.

The next step is to design and build the eco-house. With sustainability a mission of the project, the future eco-house will utilize used rail shipping containers as part of its construction. Designed by Cesar Chavez students, the two-story house will include three bedrooms, two and a half bathrooms, a kitchen, a living room, and garage — all totaling 1,800 square feet.

The eco-house epitomizes Green Place’s goals of sustainability and education, according to Whelan. Students working on the project were challenged to design a house that would not only meet the daily demands of a family, but be built from at least 90 percent recyclable materials.

“As a lot of these things go, if you do it for them it’s just going to turn out as your idea. But if you let the kids kind of go creative, they come up with stuff that just amazes you — and that’s pretty awesome,” says Whelan.

Reaching out to kids in the community is not a new idea for GM. The company has several science and engineering programs designed to involve Detroit’s youth, including YES (Young Engineers and Scientists), and A World in Motion.

Green Place’s efforts have been well received by Cesar Chavez. As an example, student engineers embraced the design initiative, having created a system for delivering water to the garden that is 10 times cheaper and more efficient than the one contemplated by Green Place’s professional engineers, says Whelan.

“Bringing the element of engineering and problem solving to the project is a big deal because then they own it, they’re learning…that’s why we do it. The whole thing is about the kids learning,” says Whelan.

With so much progress made towards its goals, Green Place now faces its biggest hurdle — fundraising. Currently, funding for the project is donation based. Already, Kohler has provided eco-friendly plumbing fixtures, while Praxis Energy Agents donated solar panels.

The overall price of the home is expected to be $70,000. Green Place is looking at the legality of raffling off the house in order to pay for its construction. As part of the revitalization effort, Whelan stresses that the completed house will not be a hand out, but, ideally, will give the owner a “debt to humanity” which they will fulfill in the neighborhood through volunteer efforts.

The home is expected to be completed in the summer of 2012.

Whelan aims to accomplish multiple goals with the project — from involving the community in the design of the eco-house to showing off various GM vehicles that will be used to transport building materials. The idea is to impress the kids and help them make the link between education and a successful career.

In essence, Green Place’s efforts marry three initiatives: education, community, and eco-awareness — all goals that Whelan addresses in his work with GM. “It fits in with everything I’m about these days,” he says. “Bringing Detroit back, bringing Michigan back, and bringing GM back by doing things the right way — winning and not compromising. My day job is bringing [the Sonic] and other small cars to life. Quite honestly at GM we didn’t really do small cars well in the past, but we’ve really elevated the game and made this car come to life.”

The Sonic is just one example of GM’s initiative to build a world-class small car right here in Michigan. GM is retooling a plant in Lake Orion to build the Sonic, which will embrace a green sensibility from the assembly line to the final coat of paint. The car is being built with reused machinery and coated in a revolutionary paint process that leaves virtually no waste, ultimately comprising a car made from 85 percent recycled materials.

Under the new GM, Whelan stresses the importance placed on bolstering Michigan’s economy — something he discusses as being addressed both through concerns for community and eco-awareness. “It has to start with education … growing leaders that can do this kind of stuff is what makes all of this happen and what makes all of it great,” Whelan says. “When we lose that we close plants, we lose money, we lose Detroit.”