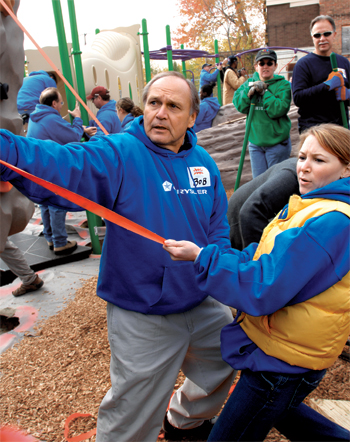 After his first 100 days as chairman and CEO of Chrysler LLC, Bob Nardelli spent the following day — a brisk Saturday in November — building a playground for students at the Business, Entrepreneurship, Science, and Technology Academy in Highland Park. While Chrysler brought 175 employees and their families together for the occasion, this wasn’t Nardelli’s first go-round on the playground. “I’ve done around 40 playgrounds over the last seven years,” Nardelli says. “It started when I was with Home Depot, and it was something I thought we could continue at Chrysler.” While Nardelli came under intense media scrutiny for accepting a large severance package from Home Depot, not many journalists covered the other side of his corporate life. “Bob’s not a grip-and-grinner,” says Darell Hammond, CEO of Kaboom, a Washington, D.C., nonprofit that’s built more than 1,300 sports parks for kids since 1995. “He shows up early in the morning and works until the project is done.” Hammond says that Nardelli called him to set up the project. “He wanted to do something in the community that involved team-building.”