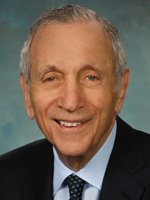 DETROIT — Alan E. Schwartz, a founding partner of Honigman Miller Schwartz and Cohn LLP, was honored by Mayor Dave Bing as the first recipient of the “Alan E. Schwartz Award.”  The award will be given annually to an individual who best demonstrates a commitment to community service as exemplified by Schwartz.

“For more than 50 years, Alan E. Schwartz has demonstrated a passion for justice and equal opportunity. He has made a significant investment in young people and worked tirelessly to strengthen our city and region. I created the Alan E. Schwartz Award to honor Alan’s service, and to inspire and recognize others who choose to follow his outstanding example,” Bing said.

Schwartz is a graduate of the University of Michigan and Harvard Law School. In 1952, he joined Jason Honigman and Milton Miller in founding the firm that is now Honigman Miller Schwartz and Cohn LLP, one of the largest business law firms in Michigan. His career goals were not just to make a better life for his family, but also to contribute to the community at large, hopefully, making a better life for all. Schwartz has served in a leadership position in numerous nonprofit organizations, including Business Leaders for Michigan, Community Foundation for Southeastern Michigan, Detroit Institute of Arts, Detroit Medical Center, Detroit Symphony Orchestra and many more.

In 2012, Schwartz was honored at New Detroit’s 45th anniversary celebration as a community leader and long-time advocate for racial equality in the region. Among his awards are the George W. Romney Award for Lifetime Achievement in Volunteerism and the Lifetime Achievement Award from the Detroit Institute of Arts.