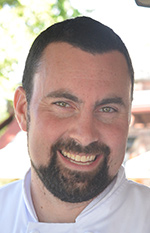 The award recognizes a pastry chef who has displayed a passion for the craft, has an accomplished reputation in the pastry field and has helped educate others by sharing skills and knowledge. Voigt’s award-winning dessert was a Meltaway Carmalized Chocolate featuring delicate pineapple and cherry fancier with orange foam, chantilly, and salt garnish.

Blending together nearly 20 years of experience at several renowned restaurants, Voigt, of Birimingham, has worked at Big Rock Chophouse and The Reserve since 2011. He began his culinary career at Oakland Community College, majoring in pastry design. His first venture in the industry was working at the nationally acclaimed Tribute Restaurant in Farmington Hills.
He also worked at Detroit’s new MGM Grand Casino working at two Michael Mina restaurants called Saltwater and Bourbon Steak. In 2009, he left to oversee The Dali Group Restaurants in downtown Birmingham prior to joining Big Rock Chophouse and The Reserve.

The Pastry Chef of the Year trophy is on display at Big Rock Chophouse. It’s engraved with all previous winners’ names and will be showcased at the restaurant over the next year.