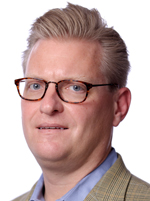 “Overseeing Bedrock’s growth during the past two years has been like conducting a fast-moving train,” said Jim Ketai, Bedrock’s managing partner. “We are fortunate to be in a position to move to the next stage in our company’s growth, and we welcome Sean’s expertise to help us reach downtown Detroit’s potential as ‘the place to be’ for office and retail space.”

Burke, a 20-year real estate industry veteran, was most recently vice president of The McDevitt Co. a full-service retail tenant representation. The company specializes in assisting industry-leading lifestyle retailers and emerging concepts in the design and execution of their regional, national, and international expansion plans. At McDevitt, he oversaw strategic planning and new store development in the eastern United States, Europe and Canada for a variety of “best in class” retailers including Urban Outfitters, Anthropologie, Free People, Terrain, Steven Alan, Carhartt, Calypso St. Barth, and Paper Source.

Prior to joining The McDevitt Co., Burke was senior director of real estate for DSW Shoes and was responsible for new store development and strategic planning in the northeast U.S. He also worked as regional real estate director for Gap Inc.’s mid-Atlantic office and oversaw all components of real estate operations and new store development for Gap, Old Navy, Banana Republic and Fourth & Towne. A Detroit, Michigan native, Burke earned a Bachelor’s of Business Administration from Villanova University.

“I am thrilled to play a role in the reinvention of the retail landscape in the heart of Detroit,” said Burke. “I have spent my career working with some of the best retailers in the world in a variety of environments including emerging retail markets in the U.S., Canada and Europe. Detroit has unparalleled opportunity and an amazing soul. I look forward to working with the great team of professionals at Bedrock on the continued evolution of Detroit as it once again becomes a world-class city in which to live, work and play.”

“Retail, Rail and Residential are key components to the success of our Opportunity Detroit and placemaking work in downtown,” said Dan Gilbert, Chairman and Founder of Rock Ventures and Quicken Loans. “Sean Burke joining our team moves us one step closer to bringing unique and exciting destination and neighborhood retail to the urban core.”