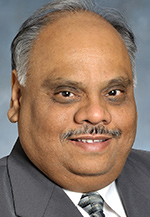 Dr. Jain is a practicing radiologist and began his career at Oakwood Hospital in Wayne, where he held several leadership positions. Before being elected chief of staff, he was chief of Radiology and vice chief of staff.

In his new role, Dr. Jain will work alongside the hospital’s president and Beaumont Health leadership to oversee overall hospital performance and in developing the vision and strategic plan for clinical activities. His responsibilities will also include delivery of care and excellence for patients, physicians and staff; recruiting and retaining a diverse clinical staff; promoting the growth of clinical programs and overseeing continuing medical education opportunities.

Dr. Jain, of Bloomfield Hills, has also served on various boards and committees throughout his career, including the American Association of Physicians of Indian Origin, the Wayne County Medical Society, Michigan State Medical Society, American College of Radiology and Radiological Society of North America.

Jain earned his medical degree from MS University of Baroda in Gujarat, India. He  obtained a Master of Science degree in medical practice administration from Madonna University.