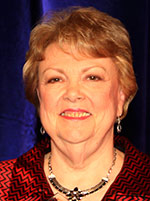 FRANKENMUTH — Judy Zehnder Keller, the president and the force behind the creation and success of the Bavarian Inn Lodge, has been chosen as the RD Musser Hotelier of the Year by the Michigan Lodging and Tourism Association.

Although this is the first year that it bears the Musser name, the hotelier of the year award is presented annually to “a visionary owner or general manager” in the state of Michigan. The award was presented at the Star of the Industry Awards Dinner in conjunction with the Pure Michigan Governor’s Conference on Tourism at the Amway Grand Plaza Hotel in Grand Rapids.

The Bavarian Inn organization is something Zehnder Keller has been a part of since childhood. Often telling people she is simply following the example of her 93-year-old mother, Dorothy, who she sees as teacher, mother, role model, philanthropist, activist, mentor and business leader and who still works in the Bavarian Inn kitchen. Zehnder Keller has built her life on the foundation of service that her parents began in the 1950s with the Bavarian Inn Restaurant. She officially began working at the restaurant at age 14 and worked in a variety of roles for 25 years before building the Bavarian Inn Lodge.

Zehnder Keller is a pioneer and role model with a long line of “firsts:” first female Frankenmuth City Council member where she served for 12 years; first female Rotary Club member in 1991 and then president in 2007-08. She continues to mentor men and women inside and outside the corporation.

Her numerous awards include statewide recognition as an Ernst & Young Entrepreneur of the Year (2002).  Zehnder Keller also ranked 10th out of 200 national finalists in Start Up Nation’s 2011 Leading Mothers in Business competition. In 2012, Zehnder Keller, along with daughter Martha Zehnder Keller, made history by receiving Michigan State University’s prestigious “Industry Leader of the Year” and “Emerging Leader of the Year” awards, becoming the first mother and daughter to claim the honors presented by The School of Hospitality Business at MSU.

Zehnder Keller attended Michigan State University where she received a Master in Arts in educational psychology and a Bachelor of Arts in Hotel, Restaurant & Institutional Management.