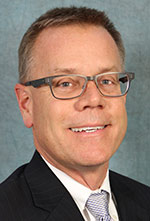 SOUTHFIELD —Todd Doenitz has joined Barton Malow Company as its new director to lead the construction company’s self-perform concrete efforts throughout the Midwest.

With more than 30 years of experience in concrete construction, Doenitz has engineered and overseen concrete formwork for more that 300 projects across the country.  Notable projects include:  Prudential Town Center 2000 Tower in Southfield, Ford Field, Van Andel Arena in Grand Rapids, MGM Grand Parking Structure in Detroit, Consumers Energy Headquarters in Jackson, and a 1.2 million square foot parking structure for ‘Downtown Disney’ in Orlando.

Doenitz is a registered professional engineer in Michigan, Ohio, Indiana, West Virginia, and Florida. He holds a Master of Business Administration from the University of Michigan and a Bachelor of Science in Civil Engineering from the University of Illinois in Champaign. He is an active member of AGC Michigan, participating in labor negotiations for over 20 years and has served in several board leadership positions, including the 2011 chairman of the board.