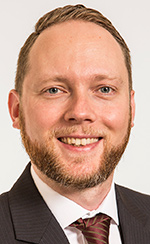 Joe Haehner has joined Baker Tilly Virchow Krause LLP as principal to lead the company’s German operations from the firm’s office in Southfield.

With more than 15 years of cross-cultural experience, Haehner will specialize in developing and fostering relationships with German-American businesses focusing specifically on the automotive industry. He was previously with EY in Detroit, Chicago, and Stuttgart, Germany.

Haehner, from Birmingham, is a German CPA, a German tax adviser and has been an international executive in both the U.S. and German markets, providing assurance and related consulting services.

Haehner has a bachelor’s degree from The Open University in England, a Diplom-Betriebswirt from Baden-Wuerttemberg Cooperative State University in Germany and a master’s in business administration from the University of Michigan, Stephen M. Ross School of Business in Ann Arbor.