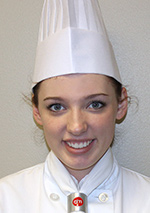 Nelson, of Otisville, is a second-year student and expects to complete an associate degree in culinary arts June 2016. During her last term, she plans to complete an externship in Ireland, and after graduation, the Marmaduke, Arkansas native hopes to move to New Orleans to work in fine dining.

The award was announced before more than 200 MCCA members at the organization’s recent 2015 Annual Awards Gala, at the Townsend Hotel in Birmingham. Nelson earned the title by competing against eight students from other collegiate culinary programs in southeastern Michigan. Each competitor had 60 minutes to prepare two portions of a signature chicken dish and 10 minutes to plate it while following strict American Culinary Federation  guidelines.

Nelson’s winning dish featured three variations on chicken titled “A Summer Trio of Chicken.” The competitors were judged on technique, sanitation, organization, timing, and utilization of food, and the flavor of the food.