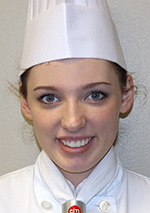 Calie Nelson, a student at Baker College of Port Huron Culinary Institute of Michigan, is preparing to battle this weekend for the title of 2016 American Culinary Federation Central Region Student Chef of the Year.

Nelson, of Otisville, will be among three other students from the central region to compete at the Culinary Institute of St. Louis at Hickey College, St. Louis. In October, she won the Michigan Chefs de Cuisine Association 2015 Student Chef of the Year Championship.

Nelson is a second-year student and expects to complete an associate degree in culinary arts in June. After graduating, she plans to work in fine dining in New Orleans and explore what different regions have to offer in the culinary industry.