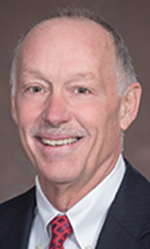 F. James Cummins, who retired as president and CEO of Baker College System in December, has become chairman of the college’s board of trustees. The appointment also includes membership on the board of regents for all Baker College campuses.

Cummins has worked for Baker College for nearly 30 years, serving as president and CEO since 2002. Before that, he was system vice president for finance, credited with setting up the organizational model of the college that now offers nine on-ground undergraduate campuses throughout Michigan and one in Pennsylvania; an online campus that offers undergraduate and graduate degrees; an online law school; and stand-alone, world-class facilities for education in the culinary arts, transportation technology and health sciences.

For several years,  he concurrently served as vice president for finance and president of Baker College of Eastern Michigan, which has since been reorganized into three separate campuses located in Port Huron, Clinton Township, and Auburn Hills.