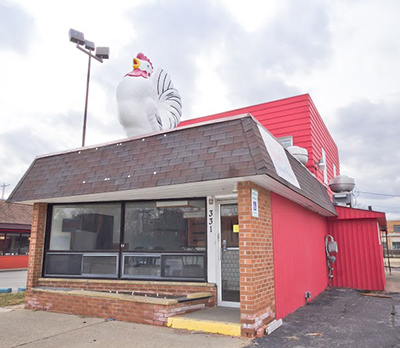 “Fast, high-quality lunches are in heavy demand, and Atomic Chicken is here to fill this void,” says Scott Moloney, owner, along with Chefs Matthew Baldridge, and Greg Reyner. “The menu for Atomic Chicken will be unique for the area, with an emphasis on fresh ingredients prepared in an innovative style.”

Atomic Chicken Clawson, to be located at 331 N. Main St., plans to open in April in the former site of Faym-Us Chicken, a longtime Clawson mainstay, most recognizable by the giant chicken sitting atop the restaurant. Opened in 1959, the restaurant, which served its signature “broasted” chicken, seafood dishes, and barbecue favorites, closed around 2005 and was reopened under new management in 2013, only to close again.

Moloney and his partners purchased the Clawson location in late February and have been working to open the restaurant as soon as possible.

“The city of Clawson has been an absolute delight to work with,” Moloney says. “We greatly appreciate their support and energy to get this landmark establishment open under a new (Atomic Chicken) name.”

The Atomic Chicken Detroit, to be located in Detroit’s New Center neighborhood at 6500 Woodward Ave., will shortly follow the opening of the Clawson location. Co-owner Baldridge says it will fill a void in the fast-casual lunch and dinner market in New Center.

“We have received approval of our plan review from the City of Detroit and are excited to keep moving forward,” Baldridge says. “Many items in regards to the project are in production and each day is one step closer to a final product and opening.”

Moloney opened Woodpile BBQ Shack in Clawson late last summer and also owns Treat Dreams in Ferndale and Midtown Detroit. Chef Reyner is co-owner and executive chef of Cafe Muse in Royal Oak. Chef Baldridge, owner of Dinner Club Pop Up, is known for his SPAM! pop up dinner as well as being named “Best Pop-Up Dining Experience” by Hour Detroit in 2015.