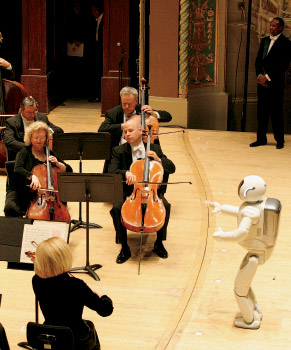 Fundraising, thanks in large part to the ongoing recession, is becoming increasingly difficult in metro Detroit and across the country. So it’s no surprise that institutions like the Detroit Symphony Orchestra have expanded the realm of what sponsorships can entail. Naturally, when Honda officials recently approached DSO music director Leonard Slatkin about the opportunity for the automaker’s ASIMO robot to conduct the orchestra, he was all ears. “We’re always looking at ways to broaden our appeal to a wider audience, especially among young people,” Slatkin says.

“It was fun and interesting to have a robot conduct the orchestra, and it’s not going to take anyone’s job away. As gimmicky as it was, a lot of kids will benefit from this.” To be sure, Honda donated more than $1 million to the DSO to fund educational programs as part of ASIMO’s appearance. Opening for cellist Yo-Yo Ma, ASIMO conducted the orchestra as it performed “Impossible Dream.” And he could make a return appearance. ASIMO (Advanced Step in Innovative Mobility) was conceived in 1986, although it took 16 years before he made his domestic debut, ringing the opening bell of the New York Stock Exchange in 1992. Since then, ASIMO has received numerous upgrades, including the ability to run.