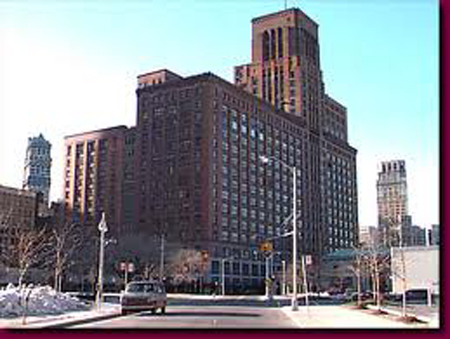 DETROIT — Rock Ventures today announced it has selected SHoP Architects as the architect of record to lead the design process for the 2-acre site of the former Hudson’s Department Store in downtown Detroit.

Headquartered in NYC, SHoP will partner with Detroit-based Hamilton Anderson Associates to create an innovative concept for a signature development on Woodward Avenue in the heart of Detroit’s Central Business District bordered by Gratiot, Grand River and Library Street.

“These two firms, known as premier urban catalysts, were chosen for their innovation and creativity, as well as their track record of committing to community engagement,” said Jeff Cohen, founder, Rock Companies. “We believe SHoP and Hamilton Anderson will join a long list of distinguished architects including Yamasaki, Burnham and Kahn who have created landmark buildings in Detroit that stand the test of time.”

SHoP is the architect on dozens of world-renowned projects like the Barclays Center at Atlantic Yards in Brooklyn, N.Y. where the world’s tallest modular housing towers — also designed by SHoP — are under construction. The modules are being fabricated in a nearby factory setting with the Brooklyn Navy Yard and point to a promising new frontier for urban manufacturing. Hamilton Anderson’s notable Detroit area projects include the Tech One Building at the TechTown Research and Technology Park, Wayne State University Welcome Center and the award-winning North Terminal at Detroit Metropolitan Airport.

“SHoP and HAA will be charged with the mission of designing one of the most important sites in downtown Detroit that honors the city’s architectural legacy as well as complements Detroit’s recently-renovated and newer buildings,” Cohen added.

The selection of SHoP comes on the heels of a global architectural ideas competition for architects, designers, planners, artists and the public hosted by Rock Ventures in March 2013. This competition was designed to reengage the community with the Hudson’s site and attract and exhibit ideas for the potential future use of this key location. The competition attracted more than 200 entries from across the world. To see all of the design ideas, winners and learn more about the competition visit hudsons.opportunitydetroit.com. Judging for the Hudson’s site ideas competition took place in June of this year with interviews of several additional architectural firms occurring over the past few months.

“In visiting Detroit, we’ve experienced the zeal and sense of entrepreneurship that underpins a vibrant urban environment. Through our inclusive design process and engagement with academia, we look forward to becoming part of the local culture and conducting a dialogue about the future of downtown,” said William Sharples, SHoP principal.

“The Hudson’s block is historic and full of symbolism for Detroiters everywhere; it is the emotional and physical heart of downtown,” said Kent H. Anderson, principal at Hamilton Anderson Associates. “This project has the capacity to link disparate parts of downtown and become a catalyst for change and development beyond its immediate surroundings.  Breathing new life into this site purveys what we have all been waiting for — confirmation that the heart of the Central Business District will beat strong. We are proud to be part of the design team in this critically important effort.”

Originally an eight story building constructed in 1891, Hudson’s Department Store was an iconic fixture in downtown Detroit and a shopping destination for millions of Michiganders for nearly a century. With frequent additions, it grew to 25 stories and 2.2 million square feet before closing in 1983. The building was imploded in 1998.

“Blending the talents and expertise of Detroit’s own Hamilton Anderson Associates with a firm of SHoP’s international acclaim is a winning combination for everyone involved,” said George W. Jackson Jr., president and CEO of Detroit Economic Growth Corp. “This is a site that was important to Detroit’s past and is significant to its future. It deserves a design team that can respect downtown’s rich architectural heritage and project its strong steps toward the future.”

In December, SHoP and HAA will meet with local stakeholders to discuss programming and design concepts. In early 2014, the two firms will host a lecture series for the community to learn more about the architects, the Hudson’s site and what it will take to get a project of this magnitude underway.

“Designing a signature architectural project from the ground up in downtown Detroit — or any great city — is an opportunity of a lifetime, and we are committed to getting it right,” said Dan Gilbert, chairman and founder of Rock Ventures. “We look forward to working with our local and state partners to help build a lasting contribution to our city.

“Our goal is that this project will become not only a symbol of Detroit’s past and present, but more importantly, highlight the high-tech potential, creative future of opportunities for Detroiters and visitors from around the world,” Gilbert added.