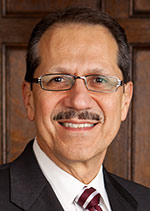 GRAND RAPIDS — Juan Olivarez, president of Aquinas College, has been elected to the Council of Independent Colleges board of directors and will serve a three-year term.

Before becoming president of Aquinas College in 2011, Olivarez held leadership positions at Grand Rapids Public Schools for more than 10 years, and Grand Rapids Community College for more than 20 years. Through the years, he has also volunteered his time on a number of local, state and national boards and committees, including the National Institute for Literacy, Higher Education Research and Development Institute, Association of Catholic Colleges and Universities, Michigan’s Colleges Alliance, and Van Andel Education Institute.

Hospice of Michigan Adds Four to Foundation Board