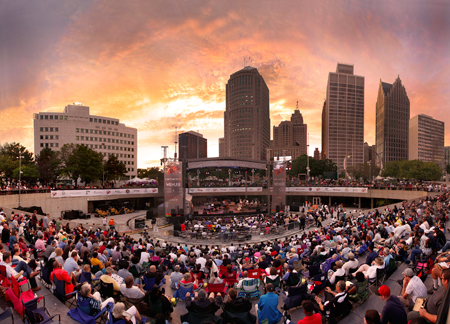 “Each year we work harder than the last to make the Detroit Jazz Festival an experience that adds to the cultural fabric of this region and this music. Our lineup features incredible artists, free of charge, who will once again make this a can’t-miss event,” said Gretchen Valade, chair of the Detroit Jazz Festival Foundation. “The rich culture of jazz history in Detroit lives on through the Festival this Labor Day weekend and all year with the many activities we do to keep this spirit alive. This is really about what Detroit and this music have to offer the world.”

More than 100 performances will take place on four stages located throughout Hart Plaza and Campus Martius. Artist in Residence and Grammy-winning pianist, Danilo Pérez, and the Panama 500 Band will open the Festival on Friday at 7:15 p.m. followed by the David Murray Big Band featuring Macy Gray at 8:45 p.m., both on the JP Morgan Chase Main Stage. Saturday through Monday the music will start as early as noon and end at approximately 10:45 p.m. For those wanting more, there will be fireworks Saturday and Sunday night on the Detroit River after the last performance and late night jam sessions from 11 p.m. to 1 a.m. in the Volt Bar & Lounge in the Detroit Marriot at the Renaissance Center, the Festival’s official hotel.

“Year after year we are honored to present this incredible opportunity to see some of jazz music’s best artists perform live in the heart of Detroit,” said Chris Collins, artistic director for the Detroit Jazz Festival. “Our goal this year was to select an eclectic lineup that embodies all genres of jazz music and spanning across different generations. We want to highlight the best that jazz has to offer, and I believe this year’s lineup definitely accomplishes that.”

In addition to the performances throughout the weekend, attendees will have the opportunity to see artists up-close and unplugged in the Chrysler Jazz Talk Tent, which offers a deeper dive into the artists and history with interviews, panel discussions, presentations and performances. One key Talk Tent segment not to miss is the DownBeat blindfold test, Sunday at 3:45 p.m., where Geri Allen will test her jazz music recognition skills. For more information on the Chrysler Jazz Talk Tent, hosted by jazz historians Jim Gallert and Lars Bjorn, visit detroitmusichistory.com/upcoming.html.

The weekend also provides fans of local musicians the opportunity to see performances from accomplished Detroit-native artists, such as Geri Allen and the 2013 Homecoming Band, the Sean Dobbins Organ Trio, the Scott Gwinell Ensemble, and numerous other musicians featured in the Marcus Belgrave “Trumpet Call.”

The Detroit Jazz Festival gives back to the region not only by featuring Detroit- and Michigan-based artists during the festival weekend, but also through year-round initiatives that work to promote the history and development of jazz music in Detroit and help maintain the city’s legacy as a music hub. For example, as part of its mission to educate students about the importance of music, the Festival puts on a variety of concerts, workshops and competitions to foster young talent from the region. For the seventh year in a row, the Wayne State University Department of Music and the Detroit Jazz Festival teamed up to bring promising high school musicians the J.C. Heard Jazz Week@Wayne program, a week-long, audition-based jazz workshop that provides students with an intensive and rewarding jazz education. Eight exceptional students who stood out during the program earned a spot in the J.C. Heard All-Star Youth Ensemble, which will be performing at the festival at 12:15 p.m Monday on the Carhartt Amphitheater Stage.

In addition to performances by the J.C. Heard All-Star Youth Ensemble and several other high school jazz ensembles, the Michigan State University Big Band I, the University of Michigan Jazz Ensemble with special guest Lee Konitz and ensembles from Central Michigan, Oakland and Wayne State Universities also will be performing over the weekend.

The Festival also is extending its support for national artists for the second year in a row by staging national performance and arranging competitions. This year the Festival welcomed submissions from up-and-coming trumpet artists and composers from all around of the country. Upon judging from a panel of prominent jazz artists and educators, including Marcus Belgrave and Chris Collins, Theo Croker from New York City won the trumpet competition and Scott Nimmer, also from New York City, won the arranging competition. Both winners received a cash prize and Croker will perform at the festival.

This grand festival would not be possible without the generous support from a variety of sponsors, including the Chrysler Brand, JPMorgan Chase & Co., Opportunity Detroit, Carhartt, Mack Avenue Record and DTE Energy Foundation.