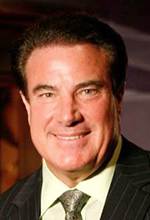 Joseph Vicari, owner of Andiamo Restaurant Group, has been named 2016 National All Star Man of the Year by The Leukemia & Lymphoma Society.

Vicari participated as a nominee for the organization’s largest annual fundraiser, the Man & Woman of the Year competition. LLS organizers announced that Vicari’s participation helped to encourage more than $177,000 in donations. The money raised supports efforts – locally and nationally – to fund blood cancer therapies.

Vicari participated in the Man & Woman of the Year program in honor of his close friend, James Giftos, who passed away in 2011 after a long battle with Multiple Myeloma, a blood cancer related to Leukemia. Giftos founded National Coney Island and was an esteemed figure in Detroit business

While Vicari has participated and supported the LLS effort in the past, this marks his first year as a national candidate, and national All Star Man of the Year recipient.