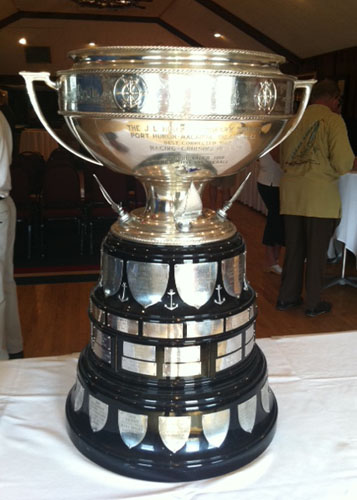 The winds of economic recovery have helped boost the number of sailboats and sailors for the 2011 Bell’s Beer Port Huron to Mackinac Race, to be held July 23 at the southern edge of Lake Huron. Hosted by the Bayview Yacht Club in Detroit, the 87th regatta will host 220 boats and some 2,500 sailors — the most in five years, say race officials.

“The experience of sailing on Lake Huron is never the same,” says John Burke, 2011 Commodore of the Bayview Yacht Club. “Everything is new and fascinating. It’s addicting.”

Last year, the race had an economic impact of $25 million, according to noted economist David Littmann.

As per custom, larger boats will race along the so-called Cove Island, route, while smaller craft will traverse the shore course. “The boat to look out for this year is Bill Alcott’s ‘Equation’,” says Race Chairman Charlie Elmer.

While the bulk of the entrants hail from Michigan, seven other states are participating, including Texas and California. International sailboats include teams from Canada and Switzerland, the latter hailing from the Royal New Zealand Yacht Squadron.

In other news, Bell’s Beer’s is the new title sponsor of this year’s regatta (its third year of sponsorship). Larry Bell, founder and president of Kalamazoo-based Bell’s Beer, the largest brewer in the state, says the company is “absolutely thrilled” to be at the top of the race marques.

“It’s the biggest thing our company has ever done,” Bell says. “It celebrates Michigan’s greatest resource — water — and the spirit of the people that live in Michigan.”

Other sponsors include Shepler’s, The Grand Hotel, Flame Furnace, Celani Family Vineyards, and Moet Hennessy USA. Bayview is also partnering with the Port Huron Yacht Club for the race (10 percent of the participating boats are from Port Huron).

In conjunction with the race, the Second Annual Blue Water Festival will be held from July 21 to July 23 in Port Huron. The festival will include performances by 38 Special, country music artist Ashton Shepherd, local musicians Gasoline Gypsy, among others. A parade of lights consisting of more than 30 boats will close the festival.

Ted Everingham, Commodore Emeritus of Bayview, says the history of the race and the yacht club are intertwined. Ten years after the club opened in 1915, a handful of members raised a combined $450 to put on the first Port Huron to Mackinac Race. Out of the 12 boats that sailed, only four made it to Mackinac Island.

“Sailing is as much of a part of the culture as the fireworks in Detroit,” says Everingham. “Wherever boats are raced, the people who sail those boats know Bayview.”

Bruce Babiarz, president of BAB Associates in Bloomfield Hills, the official race promoter, says the event is invaluable to the state. “This race represents everything that’s great about a Michigan summer,” Babiarz says.

Detroit’s professional sports teams will make their mark in the race for the second year in a row. Last year, The Detroit Tigers sponsored the winning sailboat, as part of a contest among the four teams.

In addition, this year’s race marks the first time there will be live streaming video online. About 20 boats will be at the start line to make it more interesting for first time viewers. Bayview is expecting around five million page views during the time of the race.