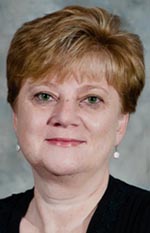 DETROIT — The American Institute of Architects Michigan has announced that Cathy Mosley, Hon. Aff. AIAMI is their new executive director. The announcement came after a year-long process of a nation-wide search and multiple rounds of interviews with candidates from across the country.

Mosley has worked with the AIA Michigan for more than 30 years, but she was subject to the same rigorous tests as the other applicants. Mosley was ultimately chosen not only for her knowledge and respect for the organization but for her creative leadership and innovations within the organization.

Mosley assumed the role of interim executive director during the search process and, with the needs of the membership as her central focus, she made many accomplishments during the interim months. In response to membership needs, she implemented a communication overhaul, hiring dedicated staff, streamlining newsletters and weekly updates, and initiating social media interaction with members and the general public alike. Mosley has taken a special interest in preparing the next generation of AIA and architectural industry leaders with programs specifically focused on this membership segment to prepare them for leadership roles. “Engaging our membership at every level and partnering with other organizations in the building industry are key to overcoming the challenges and rebuilding a vibrant workforce in this post-recession economy,” Mosley stated recently. She has also been traveling across the state to many of the AIA Michigan local chapters to assist them with meetings and communicating initiatives from AIA National.

Mosley is considerate of public awareness and the prestigious reputation of the AIA. She has connected the AIA Michigan with other organizations in the building industry to create symbiotic and mutually beneficial relationships. Mosley has also made great strides in fundraising and public awareness outreach at these events.

Mosley also began a recycling program at the Beaubien House, headquarters of the AIA Michigan, and uses online resources for sharing important documents and event information and reducing waste and resources.