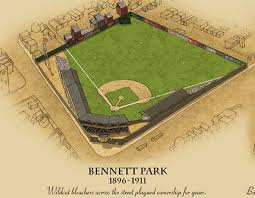 In Detroit, what’s old is often considered disposable — it’s the flashy new vehicle that counts, not last year’s model. We all know about the landmarks and historic structures the city has razed or left standing in ruin.

But within this context, Detroit has an extraordinary opportunity to resurrect a piece of its past at a historically significant site. If done right, the project could stand as a progressive model for urban revitalization. It would be an unprecedented example of historic reconstruction never before attempted by a major American city.

The northwest corner of Michigan and Trumbull stands empty — an eerie and bizarre sight for Detroiters accustomed to Tiger Stadium’s familiar confines. Ghostly traces of the infield and pitcher’s mound remain. So does the center field flagpole. Thick weeds grow where generations of fans once cheered the Tigers. A few enterprising locals continue to mow the infield so they can hit grounders and play a game of catch.

Tiger Stadium has been lost. But with the site cleared, an earlier version of an historic ballpark that once stood there could be rebuilt.

Bennett Park — a single-deck wooden structure that originally held about 5,000 fans — was the Tigers’ home from 1896-1911. Some of the game’s earliest stars shined their brightest on this field. Ty Cobb first flashed his spikes at Bennett Park in 1905. Other legends who threw strikes and scored runs include: Sam Crawford, Cy Young, Frank “Home Run” Baker, “Shoeless” Joe Jackson and Honus Wagner, to name a few. Bennett Park hosted World Series games in 1907, 1908 and 1909. Make no mistake — baseball enthusiasts know that this patch of earth is sacred ground.

Plenty of photographs, illustrations, land surveys, fire insurance maps and contemporary accounts of Bennett Park exist. From these sources, developers could completely rebuild the park, from the exact configuration of its L-shaped stands to the vintage “Bull Durham”-style ads on its outfield walls.

A reconstructed Bennett Park could draw considerable interest from vintage baseball teams across the country. Each year, The Henry Ford hosts dozens of teams that play by 19 th-century rules for its “World Tournament of Historic Baseball.” That tournament and others could be played at Bennett Park. What member of the “Columbus Capitals,” “New York Mutuals” or Dearborn’s “Lah-De-Dahs” wouldn’t want to play on the very site where Cobb rapped out his first major league hit? Not to mention youth, college and semi-pro teams. The ballpark could serve as a living history museum and be a destination for thousands of fans who long to see the sport as it once was played, well before the advent of luxury suites, electronic scoreboards and multi-million dollar free agents.

The Detroit Economic Growth Corp. has rejected several redevelopment proposals for the site over the past year, citing a lack of “financial feasibility.” The most prominent submission was a $65.3 million plan calling for a charter school, retail shops, housing, headquarters for two nonprofits and a rehabilitated ball field. Constructing and maintaining a small wooden ballpark and less expansive field (Bennett Park originally occupied about half of Tiger Stadium’s 9.5 acres) would be much more practical.

Detractors might say there wouldn’t be enough Return On Investment to make the Bennett Park project feasible. Long-term sustainability is debatable, but one could reference the Westin Book Cadillac as an example of a successful renovation project in Detroit. If the Book Cadillac can reopen, surely the Bennett Park project (which would require only a fraction of the hotel’s $200 million renovation costs) is feasible. And with the right visionary and investors, Detroit need not commit significant resources to the project.

Tiger Stadium is gone and we’ll never really be able to go back. What remains are ripe opportunities to celebrate Detroit’s past and create a new attraction by rebuilding Bennett Park. Vestiges of some historic major-league ballparks remain, such as a portion of a wall from Cleveland’s League Park. But no other major American city has yet attempted to reconstruct a classic ballpark. In nearly all cases, it would be impossible to rebuild on the same site anyway, since the land has long since been redeveloped.

Call it “back to the future” or the ultimate recycling project — Bennett Park could be brought back to life because the land is open, unused and available. The $3.8 million in federal funds sit on the table. A reconstructed Bennett Park could be a symbol of hope and a sign of what’s possible for Detroit.

Instead of paving a parking lot, let’s consider recreating baseball paradise in Detroit.

Jeff Samoray is principal of Samoray Communications LLC, a copywriting and creative consulting business. He is also a member of the Society for American Baseball Research.