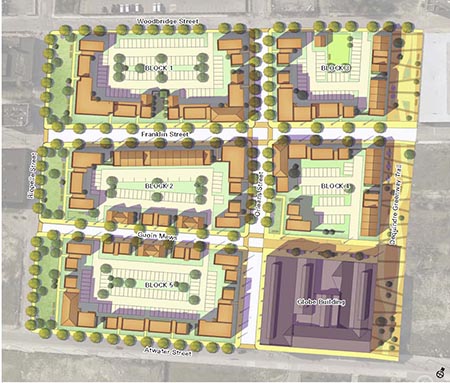 DETROIT — The Economic Development Corp. of Detroit has approved the preliminary terms of a deal with McCormack Baron Salazar to build a 300-unit residential and retail development along Atwater Street at the Dequindre Trail.

MBS plans to spend $55 million building Rivertown, phase one as a series of low-rise apartment structures along both Atwater and Franklin Streets between the Dequindre Trail Greenway and Riopelle Street. The site is adjacent to the State of Michigan’s Outdoor Adventure and Discovery Center, currently under construction at Atwater Street and the Dequindre Trail.

Phase two of the plan would build an additional 200 housing units on the vacant property extending along Atwater Street west of Riopelle Street. The EDC owns most of the property involved and would transfer it to the developer if it can meet the other terms of the agreement. It is also offering a loan to help the developer with implementation costs.

George W. Jackson, president and CEO of Detroit Economic Growth Corp., which managed negotiations on behalf of the EDC, said, “It is time to reignite the redevelopment of the East Riverfront, and we’re excited that a quality developer has recognized the opportunities here. McCormack Baron Salazar is a firm with a solid reputation, and we are confident that it will lead others to the prime real estate we have along the Detroit River.”

Richard Baron, chairman and CEO of MBS, said, “I’m a Detroit native, and it’s good to be home again to participate in the revitalization of a great city. We have a project that takes advantage of one of its most valuable assets, the Detroit River, as well as all the investments in the state park and RiverWalk that are literally a few steps from our door.” The EDC assembled the property, demolished structures, and has made $8 million in road and other infrastructure improvements around the property.

Wayne County has supported the project with assistance preparing the site for redevelopment. “This project is proof that collaboratively pooling our resources brings in positive outcomes for the people of Detroit and Wayne County as a whole,” Wayne County Executive Robert Ficano said. “We’re glad to have contributed $200,000 to complete the environmental report that helped developers determine the viability of the EDC’s land on the east riverfront.”

The EDC vote allows MBS to begin due diligence and an application for financing from the U.S. Department of Housing and Urban Development. The HUD participation will allow a portion of the apartments to be available for families meeting HUD income thresholds. Goldman Sachs Urban Investment Group is also providing equity capital for the project, Invest Detroit is providing a subordinated loan, and Michigan Economic Development Corporation is also supporting the project.

Jackson said, “Make no mistake, we have created a new culture of collaboration in Detroit. When an economic development opportunity arises we know we can count on strong participation from private, public, and philanthropic organizations. That’s a transformation as important as any other.”