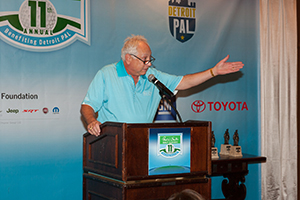 DETROIT — The 11th Annual Paul W. Smith Golf Classic held Monday, August 11, raised more than $500,000 for Detroit PAL. It brings the total amount raised from the event to more than $4.5 million net over the last 11 years.

The sold-out event is spearheaded by Paul W. Smith, host of The Paul W. Smith Show, on News/Talk 760 WJR and is designed to support the athletic, academic, and leadership programs of Detroit PAL.

The event is the largest fundraiser for Detroit PAL, raising funds to support more than 20 percent of Detroit PAL’s annual budget.

“As we start the second decade of the event, the enthusiasm within the corporate community has not waned,” Paul W. Smith said. “Our sponsors and supporters recognize the growing need for the work Detroit PAL does championing the needs of the children. And they want to be a part of that work. Thanks to their commitment and generosity 11,000 kids each year are enriched through Detroit PAL programs.”

Donations can still be made to Paul’s PALs online at paulwsmithgolf.com.