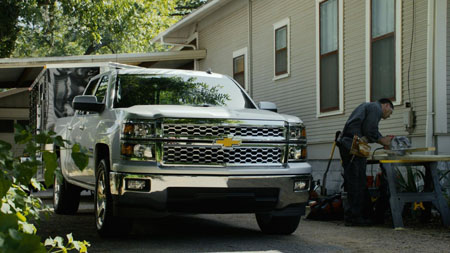 DETROIT — The all-new 2014 Chevrolet Silverado will be celebrated in a marketing campaign created to speak to the heart of the full-size pickup market.

The campaign, featuring an original song by Grammy-nominated recording artist Will Hoge, begins exclusively in Texas, where one of every six pickup trucks in the U.S. is sold.

“There is no more appropriate place to launch the new Silverado campaign than in Texas, the heart of truck country, and no better way to launch it than through music,” said Tim Mahoney, Global Chevrolet chief marketing officer. “The song ‘Strong’ celebrates Silverado owners who are as dependable and capable as their trucks.”

Originally developed as a song, “Strong” will debut July 4 as a music video, digital download and in a television ad.

The Silverado anthem was created with pickup truck drivers and their values in mind.  Most of the people who appear in the video are real Chevrolet owners, not professional actors. The lyrics to Hoge’s song speak to the strength of hardworking, honest and dependable men and women. Also, a tone of American pride is reflected in the launch date of July 4.

“Chevrolet has a long-standing relationship with music, and Chevys have been mentioned in more than 800 popular songs,” said Mahoney.  “The lyrics to ‘Strong’ were inspired by the Silverado and the people who drive them. We think this original song and our all-new Silverado harmonize perfectly.”

The Silverado marketing strategy begins with the song, but rolls out both in Texas and throughout the country during the second half of 2013. Interactive Silverado displays and ride-and-drives began in June across Texas. Nationally, Silverado marketing plans include customer activities at NASCAR races, music venues and sporting events, as well as a partnership with the National Volunteer Fire Council.

The Silverado campaign fits within Chevrolet’s brand platform, Find New Roads. Future ads will focus on the features of the Silverado, including its class-leading V-8 fuel economy and towing capability.

The 2014 Silverado 1500 is an all-new version of Chevrolet’s best-selling vehicle in the U.S. All-new from hood to hitch, Silverado is designed to be the best-engineered and more refined full-size pickup.  With its trio of new EcoTec3 engines, it offers the best fuel economy of any V-8 pickup with class-leading payload and towing capabilities.  Silverado crew cab models are arriving at dealerships nationwide.  Regular and double cab Silverados will go on sale later this summer, followed this fall the Silverado High Country premium model.