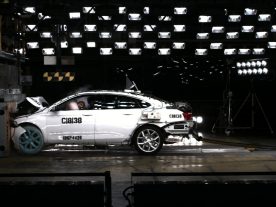 The redesigned, full-size sedan presents one of the most comprehensive collections of standard and available safety features in the segment. It employs advanced technologies — including radar — to help avoid crashes. Visual and audible alerts, depending on the alert feature, help drivers identify potential crash situations and even intervene when a crash threat appears more imminent. The alerts are designed to identify potential threats with sufficient warning to give the driver time to react and make changes.

The available safety features and benefits include: