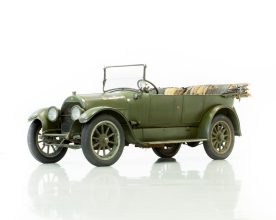 The HVA and Cadillac announced the listing which will be archived in the Library of Congress today.

The car’s story was almost forgotten, but the efforts of the current owner and the HVA ensure future generations can learn about it, and about Cadillac’s 100-year history of mass-producing V-8 engines.

The Cadillac touring car was used to support French and American troops near the front during the second battle of the Marne and later was used by Eleanor Butler Roosevelt, wife of Theodore Roosevelt, Jr., during her two-month mission to find and create locations for soldiers to enjoy time off. Roosevelt, the son of President Theodore Roosevelt, served in both world wars. He earned a Medal of Honor for his heroics at Utah Beach on D-Day.