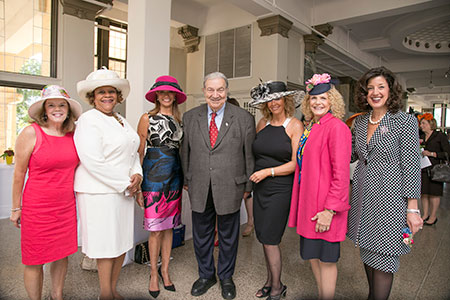 “Polish the Jewel punctuates what makes Belle Isle so special, the supporters and volunteers who are so dedicated to the island, and all it has to offer,” says Michele Hodges, president of the Belle Isle Conservancy. “So much has happened over the last 10 years of Polish the Jewel events that has breathed new life into the island, and I look forward to seeing the exceptional opportunity that will be uncovered over the next 10 years.”

“Sarah was the primary force behind the very first luncheon a decade ago,” Hodges says. “Not only has she been instrumental in developing the luncheon as a tradition we look forward to each year, but she has also been one of Belle Isle’s greatest supporters throughout its transformation.”

Over the past nine years, Polish the Jewel has raised more than $2.5 million to successfully fund two major construction projects on Belle Isle Park — enhancements to the island’s famed Sunset Point, as well as a historically accurate restoration of the horse stable roof. Proceeds from the 2014 Polish the Jewel will support further improvement projects, in partnership with the Michigan Department of Natural Resources.