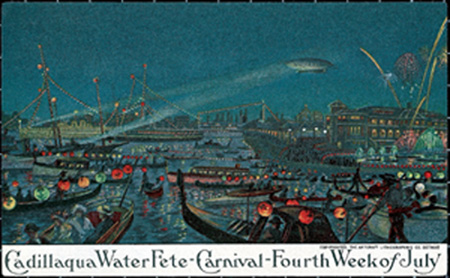 A century ago, the Detroit Board of Commerce organized the Cadillaqua festival with an eye toward casting the city as the aquatic sports capital of the world. The Motor City moniker, it seems, wasn’t enough. With civic pride billowing their sails, festival organizers were quick to raise $70,000 of the estimated $200,000 needed for the nearly week-long celebration.

“They hope to make it the biggest festival of its kind ever held in this country,” The New York Times reported in advance, breathlessly listing rowing and swimming contests, yacht and powerboat races, and even a gripping showdown between a “floatplane” racing through the air against a speedboat on the water. In addition, there would be fireworks displays, pageantry, and parades.

As the frenzy grew to commemorate the anniversary of the city’s founding by Antoine de la Mothe Cadillac on July 24, 1701, the popular organizing chairman, Andrew H. Green Jr., found himself declining offers to run for mayor. However, his modesty only ran so deep. Green, general manager of Solvay Process Co., agreed without much coaxing to play the role of Cadillac in the pageant.

A spectacular fireworks display kicked off the festival on Monday evening, July 22. The next day, Green, as Cadillac, led a costumed cast of 100 French-Canadian voyageurs from their northern camp along the St. Clair River. After negotiating the waters of Lake St. Clair and entering the Detroit River, their longboats were met at Belle Isle by a fleet of federal vessels and private yachts. One-term Gov. Chase Osborn welcomed Cadillac aboard the flagship of the fleet. A few hours later, at the foot of Third Street, Cadillac joined a parade of 5,000 automobiles.

Leading the motor parade to the reviewing stand at Grand Circus Park was the Briggs-Detroiter Co.’s very first Detroiter touring car, introduced at the 1912 Detroit auto show in January. The car’s owner, florist Robert W. Jean, lavished the hood with roses. “It is estimated that more than $25 million worth of machines will take part in this procession,” The New York Times reported. Full of enthusiasm, organizers boasted the 5,000 cars would, together, cover 103,000 parade miles; burn 5,000 gallons of gasoline; and eat up “the equivalent of 20 complete sets of tires.” One attendee, Edward Jewett, 75, drove his Hudson all the way from Phoenix, Ariz., just to join the fun.

Another highlight of the week was the Thursday night boat parade at Belle Isle, viewable from “Cadillaqua Court” — a platform which measured 2,000 feet long and 300 feet wide, and sat atop pilings in the Detroit River opposite the island’s beach. An orchestra and choir added poignancy as the electric-illuminated boats paraded by. Friday night’s grand finale featured a Venetian Night, with canoes plying Belle Isle’s colorfully lit lagoons and canals.

Another set of fireworks captured the public’s eye that evening — and well into the following weeks. With $10,000 of his own money, Cadillaqua chairman Green secretly hired detective William J. Burns, then known as America’s Sherlock Holmes, to ferret out corruption and insider dealings within City Hall.

With newspaper reporters duly tipped off, Council President Thomas Glinnan and 10 city council members were arrested in a series of raids. They were accused of bribery in exchange for approving Wabash Railroad’s petition to close a street near the Fort Street Union Station (demolished in 1974 and replaced by Wayne County Community College). But the charges didn’t stick; only Glinnan was tried, and he was eventually acquitted. db