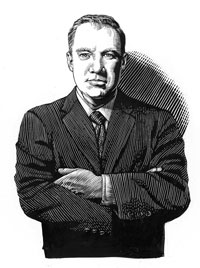 What downtown Detroit has in abundance is potential. Offering one of the nation’s most impressive collections of office structures built prior to 1940, the central business district is an architectural playground ripe for a turnaround.

Granted, several historic skyscrapers like the David Broderick Tower and the David Whitney Building, both located along Woodward Avenue and overlooking Grand Circus Park, have long been vacant. But look for their redevelopment plans to be announced in the coming months.

What will drive demand? Historic tax credits and public grants are available, both of which limit the need for private financing. In turn, the neighboring stadium and theater districts are drawing steady traffic, and they offer one of the most impressive backyards an individual could ever hope to enjoy.

There’s also a growing employee base in the downtown. General Motors and its affiliates, like OnStar, are hiring. Compuware, Quicken Loans, GalaxE.Solutions, and other technology companies are adding staff. So are Little Caesars, Strategic Staffing Solutions, and Blue Cross Blue Shield of Michigan.

The ongoing restoration of Capitol Park and Paradise Valley (formerly Harmonie Park) help complete the scene, while Hart Plaza is slated for a major upgrade that will serve to complement ongoing improvements at nearby Cobo Center.

There’s talk of a new sports arena that would be shared by the Detroit Red Wings and the Detroit Pistons. That facility most likely will be located just outside the central business district in an area bounded by Interstate 75, Woodward, Second, and Temple.

The other demand-generator is an upcoming light rail system on Woodward, running from Hart Plaza to West Grand Boulevard. The three-mile stretch offers what every rail system needs to operate profitably: It connects two or more major population bases. In this case, the rail line would link downtown Detroit with Wayne State University.

As it stands, the U.S. Department of Transportation has started an environmental study of what’s being called M1 Rail, a prerequisite for federal funding. Private and public investors have assembled $125 million in cash and tax credits for the project, which is slated to be operational by 2013.

Over the last 15 years, the district has seen monumental changes with the addition of Ford Field and Comerica Park, and the restoration of the Detroit Opera House, the Gem Theatre, Book Cadillac, Music Hall, and Grand Circus Park. Major office buildings have been renovated or added, along with three casinos (although MotorCity Casino is located just outside the downtown).

Clearly, downtown Detroit needs a great deal more work. Areas in need of improvement include a series of vacant parcels west of the Fox Theatre, many of the structures lining Capitol Park and Washington Boulevard, and a collection of empty commercial buildings in the financial district.

None of the upgrades will happen overnight. But where there is great potential, there lies great promise.