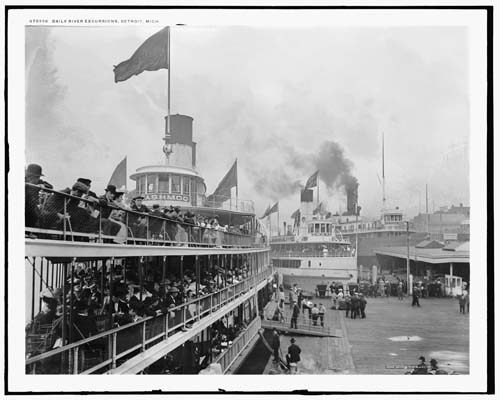 “If you seek a beautiful steamboat, look around you,” John Van Alstyne told the crowd on July 16, 1892, playing off the Michigan motto while launching the 165-foot vessel Wyandotte at its namesake town. Fast over the water and well-appointed — the lower deck was outfitted with a smoking lounge for men and a retiring room for ladies — the ship was the latest product from the Detroit Dry Dock Co.

Prior to the rise of Detroit Dry Dock, Marine City led the state’s shipbuilding industry, but its location so far from a skilled workforce — Detroit produced thousands of stoves at the time — proved to be a hindrance. Detroit Dry Dock Co., incorporated by Capt. Stephen Kirby in 1872, was located at Atwater and Orleans streets (a few blocks east of the current Renaissance Center). At the time, the Detroit Free Press noted that Dry Dock offered “all the necessary materials for the repair of vessels and shipping, and no delay will occur in making vessels ready for service.”

The company grew larger in 1877 when it acquired nearby Wyandotte Shipbuilding. Ironically, Capt. Kirby’s son, Frank, a naval architect, supervised the downriver establishment with the backing of Detroit’s first great industrialist, Eber Brock Ward, who wanted to make steel-hulled ships with plate from his nearby ironworks mill.

From that point on, until 1922, Detroit Dry Dock Co. ran two yards, turning out every type of vessel — from lake steamers like the 297.5-foot City of Detroit to the 316-foot railroad ferry Lansdowne, built in 1884. A hundred years later,  the Lans-downe could be found near Hart Plaza, serving as a floating restaurant. Kirby even designed the excursion steamers Sainte Claire and Columbia, used until the late 1980s for the Bob-Lo Island run.

The neighboring Dry Dock Engine Works on Atwater Street created 129 steam engines for marine use; more than one-third of those were sold to Detroit Dry Dock Co. Henry Ford learned the machinist’s trade during his employment at the Works from 1880 to 1882. Julius Melchers, one of Detroit’s first great artists, sometimes supplied a vessel’s finishing touch by carving the figurehead.

As the operation grew, Dry Dock No. 2 replaced an existing dock in 1892. The new facility was the second-largest dry dock on the Great Lakes, surpassed only by Port Huron’s. It stretched 378 feet and, with more than 2,000 pilings, it could accommodate a fully loaded ship for repairs.

With its growth in stature, the operation served to hold its competitors at bay. Even politicians proved to be no match. When Detroit Mayor Hazen Pingree wanted an electric light plant built on 350 feet of city-owned waterfront, he learned that Dry Dock had already leased the property for 20 years at $1,300 per year. The plant was located elsewhere.

Expansion continued at the Detroit yards; the machine shop erected in 1892 is an early example of a self-supporting, steel-framed building. That structure and others completed before 1919 still stand, and have been the subject of yet-unrealized redevelopment plans. Approximately coinciding with the machine shop’s completion was the creation of one of the last wooden ships built on the site, the Sainte Marie: a 302-foot rail-car ferry with an ice-breaking hull to push through the Straits of Mackinac.

The Kirbys sold Dry Dock in 1899 to American Shipbuilding Co., and the Wyandotte yards and Orleans Street facilities were consolidated and renamed Detroit Shipbuilding Co. The new entity eventually became AmShip Detroit. Unfortunately, the bountiful orders that were placed during World War I didn’t last, and the recession of the 1920’s hit hard.