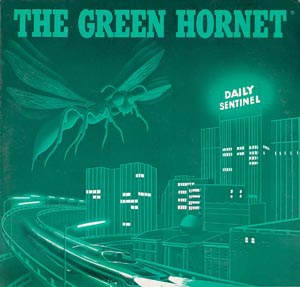 George Washington Trendle was in a fix. By 1932, the radio station that he and his partner had bought two years earlier was losing $4,000 a month. Trendle and John Kunsky knew from their days as movie palace owners that cops and robbers were always good box office draws. But what would save the station, Trendle thought, was a Western. He called a Friday-morning story conference.

With nary a press launch, the audience of 1,000-watt WXYZ soon found themselves on the edge of their seats. As Rossini’s William Tell Overture introduced a new half-hour program, parents and their normally rambunctious children settled in for the righteous adventures of a masked rider on a white steed named Silver. Yet even after several episodes, the show remained untitled. In fact, it took a young listener’s letter to prompt the addition of an Indian sidekick. As for the name, announcer Harold True eventually came up with The Lone Ranger. Months passed before Gordon Baking Co. signed as the sponsor. Gordon also operated in New York and Chicago, and the show soon began to air in those cities. In fact, things were going so well, Tonto got his own horse.

Until then, radio was a “rich man’s plaything,” according to Dick Osgood’s lively account in Wyxie Wonderland: (An Unauthorized 50-Year Diary of WXYZ Detroit). The station had been founded in 1925 as WGHP, taking the initials of its owner, Dodge Brothers ad man George Harrison Phelps. Programming originated on the Maccabees Building’s 14th floor, across Woodward Avenue from the Detroit Institute of Arts. In 1928, an intermediary took the station off Phelps’s hands for $40,000 when his business losses became unbearable. After 18 months, the Kunsky-Trendle Broadcasting Co. bought it for $250,000 and changed the call letters. Besides the federal broadcasting license, the station’s greatest asset was dramatic director James Jewell. Trendle, by far the dominant partner, shucked the CBS network and its programming. As a result, there was lots of air time to fill.

Jewell had a big hand in creating The Lone Ranger. From Dr. Fang to Warner Lester, Manhunter, he did it all for WXYZ — writing, acting, and directing. He recruited an impressively deep talent pool. George Stenius first voiced the part of Kimosabe (named for a camp near Cheboygan). When Stenius complained of being underutilized, Jewell told him to go to New York and pursue his dream. Changing his name to Seaton, he went on to write and direct Miracle on 34th Street, co-produce Bridge at Toko-Ri, and direct Airport.

By 1938, The Lone Ranger franchise was earning the broadcasting company more than $500,000 per year, including $60,000 for the first movie serial from Republic Pictures. But Trendle, looking for another hit, told his hard-pressed chief writer, Fran Striker, to “work something out” about a modern crime-and-corruption fighter. Rimsky-Korsakov’s Flight of the Bumblebee was chosen as the theme. By filtering the recording of a Duesenberg’s engine, sound engineer Fred Flowerday created the ominous drone of the series’ high-tech car. Al Hodge was selected to play Britt Reid, with Tokataro Hayashi as Kato. The Green Hornet premiered Jan. 31, 1939.

Erik Smith grew up listening to these shows. In 1962, Smith joined WXYZ-TV, where he currently co-anchors Action News This Morning. He recalls the thrill of finding himself in the “hallowed halls” of WXYZ. “It was an amazing period in Detroit broadcasting history because The Green Hornet and others were coming out of this little radio station, which was a national powerhouse,” he says.

Trendle sold out in 1946 — including television rights — to the new American Broadcasting Co. for $3.65 million. When WXYZ-TV went live in 1948, it helped sustain the early ABC network. The radio station became WXYT in 1984, closing the door on what had been known as “The Last Word in radio.”