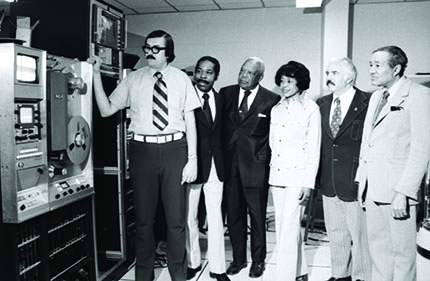 William Banks was dining at the White House with President Richard Nixon in 1972 when the conversation turned to African-Americans’ scant involvement in broadcast media. “Who can explain blacks better than blacks?” Banks often liked to ask. He already controlled Detroit’s first black-owned radio station (WGPR-FM), and now wanted to launch the first black-owned TV station. The result was Nixon’s promise of a Federal Communications Commission license.

The door was opened — but not all the way — to Banks, who grew up a Kentucky sharecropper’s son. In 1973, the FCC required the station to start with enough operating funds for a whole year. Banks, a lawyer, Baptist minister, and founder in 1950 of the International Free and Accepted Modern Masons, considered offers from financial institutions unacceptable. He ran the Masons like a personal fiefdom and, with assets accrued through members’ monthly subscriptions, he had acquired WGPR-FM for the organization in 1964. To finance the TV station deal, Banks unloaded the Masons’ 100 acres on Florida’s Gold Coast, which had been purchased two years earlier. The $750,000 transaction netted a 50-percent profit.

“Then we sold other things,” Banks recalled in an interview two months before the TV station went live. “We owned the Mackinaw Hotel in Mackinaw City, and we sold it. There were also lesser assets we liquidated.” By the time WGPR (“Where God’s Presence Radiates”) went on the air on Sept. 29, 1975 — taking a UHF band that had been out of use for three years at Channel 62 — at least $4 million was in hand for new equipment and the first year’s expenses. To save money, the TV and radio stations shared office space along East Jefferson Avenue.

Banks and programming director George White planned an ambitious slate of original shows, including a soap opera, Time to Live, and a program starring native Detroiter Della Reese. The cost, though, was easy to underestimate, and initial hopes for the operation didn’t pan out; with a weak signal and unexceptional programming, WGPR drew poor ratings. It did, however, enjoy success with a nightly dance program, The Scene. And the station was a great laboratory. Karen Hudson Samuels, who started as a news intern in 1976, recalls the “very rich opportunity” for herself and other African-Americans breaking into the business.

Working her way up to news director, Samuels met weekly with Banks for an editorial-comment program. Then in his early 70s, he was “easygoing, open, accessible, and had a lot of wisdom,” she recalls. When WGPR-TV launched, Banks was paid $225 per week as the Mason’s leader, in addition to receiving what he called a “grant for running the radio station,” then grossing more than $1 million annually. The Masons also paid him to run their David Broderick Tower, overlooking Grand Circus Park, which has since been sold and redeveloped as a residential building. Whenever the subject of his salary came up in meetings, he replied, “I was driving a Cadillac when you elected me supreme grand master, and I’m going to keep driving one.”

Banks died in his sleep in 1985, at the age of 82. At the funeral, Mayor Coleman Young said, “In his communications endeavors, he opened a new field to blacks.” WGPR-TV had slowly become profitable, but it started to lose vitality in the early 1990s. Over the objections of some community leaders who foresaw the loss of access, the Masons accepted a reported $24-million offer for the station from CBS. While WGPR-FM continues urban-format broadcasting at 107.5 FM, the TV station, known as WWJ since 1995, left a widely recognized legacy as a fertile training ground for young black broadcast professionals. db