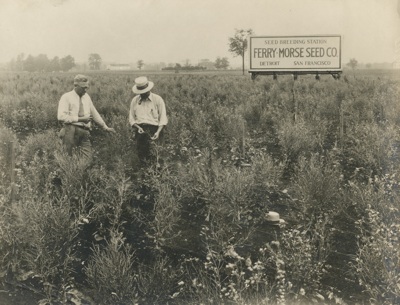 The New Year’s Day fire of 1886 started mysteriously in the packing room of D.M. Ferry & Co., and it burned with blistering exuberance. When the walls of the great seed house collapsed into Monroe Street, sparks and cinders filled the air and even the fabric of a water hose was set ablaze. Fire brigade Capt. Richard Filban became a casualty, falling to his death from a 90-foot ladder. By the time the flames were extinguished, White’s Opera House and other buildings fronting neighboring Randolph Street were lost in the $1.5-million conflagration.

Days later, Dexter M. Ferry, the seed company’s president, sent out a letter saying “we shall be temporarily delayed in issuing our annual wholesale price-list.” But with plenty of stock stored at various locations, the company met its customers’ orders. A new headquarters, built at Brush and Randolph, sustained the company for decades.

Ferry had come from Rochester, N.Y., in 1852, when Detroit boasted 22,000 residents. Clerking in a stationery store, he learned bookkeeping and moonlighted for seed agent M.T. Gardner & Co. Within a few years , he became a partner with the owner, Miles Gardner. The pair aimed to improve the traditional selling method of bulk seed. At the time, seeds sold in large bins like penny candy or sugar, and were susceptible to contamination and carelessness — with various seeds being mixed together. This led to angry customers who ended up with low-quality or, mixed seeds or, in many cases, the wrong seeds.

To prevent this, Ferry and Gardner were among the first to offer seeds sold in individual paper packets with illustrated fronts showing the plants, and giving a description of the product, and growing instructions. The company guaranteed fresh seeds — and seeds that were the right ones for growing in various regions.

To ensure inventory and product quality, farms were purchased along Grand River Avenue just beyond the city limits, as well as along old Chicago Road (now Michigan Avenue).
Sales agents fanned out across the land selling not only to farmers, but promoting home gardening with “commission boxes” and a seed rack for retail display. They offered storekeepers a percentage of sales while taking unsold packets back at season’s end.

Three years later, Ferry had taken control of the company, giving it his name, and with the Civil War came a period of expansion. His seed business grew rapidly. Before long, he managed to turn the D.M. Ferry Co. into the largest seed establishment in the world.

Ferry created an efficient, scientifically based production system that set up the company for massive success during the nation’s westward expansion. Within five years, profits jumped  from $38,011 to $268,497.

Soon, Ferry’s own income was listed as “close to $200,000” and his wealth was estimated to be in the millions of dollars.

The entrepreneur engaged in numerous other ventures, including banking and insurance. His $50,000 purchase of National Pin Co. stock led to the construction of a factory on Grand River Avenue, and by 1883 “the plant turned more than 90 tons of ordinary pins and safety pins — a rate of 2.4 million pins per day,” according to Detroit historian George B. Catlin. In 1900, Ferry ran unsuccessfully for the Republican gubernatorial nomination.

Long a supporter of the University of Michigan, in 1902 Ferry donated 20 acres of land east of Michigan Stadium, which was used as a football field prior to the opening of The Big House in 1927.

Ferry died in his sleep in 1907 at the age of 74, leaving behind the world’s largest garden seed business. His legacy includes Ferry Avenue, which runs between Cass and Mount Elliot. At the time of his death, he was president of the First National Bank of Detroit, Union Trust Co., American Harrow Co., and two insurance firms. The seed house stayed in Detroit after the 1930 merger with C.C. Morse & Co. of San Francisco, but in 1959 Ferry-Morse consolidated operations in Kentucky, ending the century-long run of one of the city’s most unique and prosperous businesses.