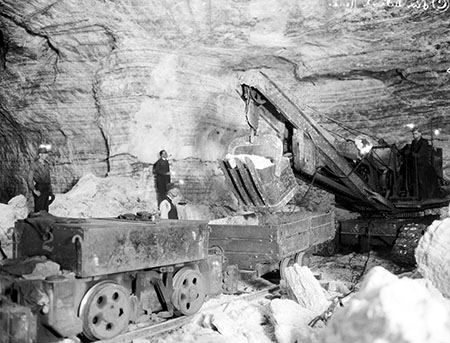 At first, the quest to extract salt below the city of Wyandotte was a nasty, dangerous business. Drilling through 1,000 feet of limestone released poisonous gusts of hydrogen sulfide and other gases. John B. Ford Sr., the founder of Pittsburgh Plate Glass Co., had arrived in Wyandotte on a tip that Michigan’s “salt beds were pure and broad” — valuable for making soda ash, used in glassmaking. A shaft was painstakingly sunk into a luscious stratum of salt, initiating the Downriver alkali industry in 1891.

But Michigan’s salt-mining industry had gotten its start almost a decade earlier. In 1883, some 2.8 million barrels were tapped from subsurface brine pockets near Manistee and Saginaw. As mining beneath Detroit expanded, an elaborate lacework was tunneled through a seam in the village of Oakwood, which has since become part of Dearborn, Melvindale, and River Rouge. The room-and-pillar system, a method of horizontal drilling borrowed from coal mining, allowed exploitation of the deposit that formed when ancient seas flooded low areas and then evaporated.

Using explosives, a single charge blasted hundreds of tons of salt at a time. Once the all-clear signal was given, hundreds of workers conveyed the salt into 10-ton containers. Whether brought hydraulically to the surface as brine or quarried out by miners, the salt was refined into compounds like caustic soda, baking soda, or bicarbonate of soda.

Beyond supplying the chemical industry, rock salt was essential for curing hides and preserving meat, for the manufacture of pharmaceuticals, and in soap-making; Detroit was, for a time, the Western Hemisphere’s leading center in the salt industry. One new endeavor in 1899 specialized in salt for the table and for ice cream-making. And with so much salt available so cheaply — output was 2.4 million tons in 1928 — rock salt was used to melt snow and ice on area roads. Before World War II, Detroit became one of the first cities to use road salt.

In 1961, Kenneth King, a Detroit Public Library employee, rode a bucket-type elevator 1,137 feet down into the 350-acre International Salt Co. mine. Writing later in the library staff’s bulletin, he described, “a calm, cool, clean world that almost seems to be carved of faintly translucent marble.” Between the massive untouched pillars, King saw 60-foot-square rooms that reached 22 feet in height. Throughout the numerous rooms, mammoth electric crushers, transported piece-by-piece down an elevator and assembled below, scooped up the salt. In earlier days, mules went below to work and stayed till the bitter end. Their carcasses were stored in a dedicated gallery.

The decades had transformed John B. Ford Sr.’ s original enterprise into Wyandotte Chemicals and, in 1966, the company reported record profits of just under $8 million on sales of $126 million. Three years later, Ford’s descendants, who held a majority stake, agreed to sell Wyandotte Chemicals to German-based chemical company BASF.

Novel uses were sometimes proposed for the gleaming white real estate. Following World War II, the Industrial Salt Co.’s corridors were seen as “a mighty handy place to hole up in if the atom bombs ever should come our way,” according to the Detroit Free Press — although each of the mine’s two elevators accommodated just 25 people. In the 1970s, meanwhile, a mine operator was denied state permits for storing hazardous waste. Public tours of the caverns were offered into the 1980s.

Today, Detroit Salt Co. still operates from a facility on Sanders Street, offering rock salt in bulk and bags for government and commercial customers. Its website (detroitsalt.com), which offers virtual tours via cyberspace, allows viewers to fly through the salt mines as if they were soaring through the clouds — offering, in its own way, a taste of heaven on earth. db