Bill McDonald and Matt Halcrow moved into neighboring Waterford Township homes around the same time. McDonald, looking to spruce up his new place, asked Halcrow to help him salvage the wood from an old barn in Imlay City. When there was material left over after his projects, McDonald sold it quickly — which sparked an idea.

For McDonald’s next home improvement effort, the duo made sure to “pick up some extra (wood) to pay for the project, and it slowly started getting out of control from there,” McDonald says. It wasn’t long before they decided to get serious. “I felt bad asking Matt to come over and help me drag beams off the trailer all the time, so I just asked, ‘Hey man, you want to just do this with me?’ ”

That’s how Reclaimed Michigan — a business specializing in one-of-a-kind custom wood furniture and lumber recovered from old barns — was born. The company’s first warehouse was 7,000 square feet, but the space  was quickly outgrown, and now the enterprise operates out of a more than 14,000-square-foot facility in Waterford Township. 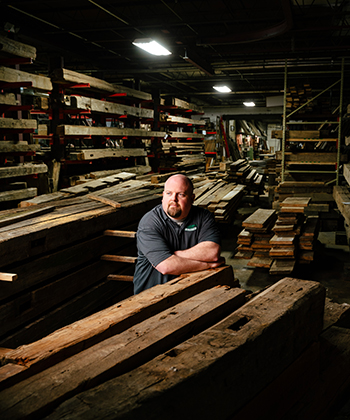 The entrepreneurs both had backgrounds that fit the business — Halcrow’s father was an apprentice cabinetmaker, and McDonald has a master’s degree in engineering — but they couldn’t keep up with the initial demand by themselves.

Their first full-time employee, Tracy, was hired to help keep up with the building demands after being a customer of the business. Then a woman named Leslie came to the shop to buy material, which McDonald suspects was a guise to see if she could get hired to build, making their first two employees in the male-dominated field of woodworking women — both of whom were coming back to the workforce after raising their children as stay-at-home mothers.

The material — nearly 200,000 board feet — sits on storage shelves along the warehouse walls and in nearly every open space, shelved or not. All the wood comes from barns within a three-hour radius of the warehouse. Word of mouth is what grew Reclaimed Michigan’s initial network of salvagers, and now the salvagers come to them.

“They’re actively looking for stuff to tear down and salvage,” Halcrow says. “We have one guy who looked at a barn and said: ‘Oh, that’s a Reclaimed Michigan barn’ right away. (He called and said) ‘I’ve got all this stuff for you, you guys got first dibs on it.’ ”

The custom furniture, barn doors, beams, corrugated roofing, and all other products come with a story. Whether it’s a beam from a barn in Ohio or lockers from an unconventional salvage — like E.T. White Junior High School in Lapeer — preserving history is a crucial aspect of the business. “Anybody can have an old chunk of wood,” Halcrow says. “We can (share information about) where it came from.”