In an era of escalating global conflicts and terrorist attacks, redundancy is an asset the free world can’t afford to overlook. To wit: Shipping iron ore and other cargoes from the Upper Peninsula through the Soo Locks provides manufacturers, builders, and food processors with access to key raw materials at competitive prices. 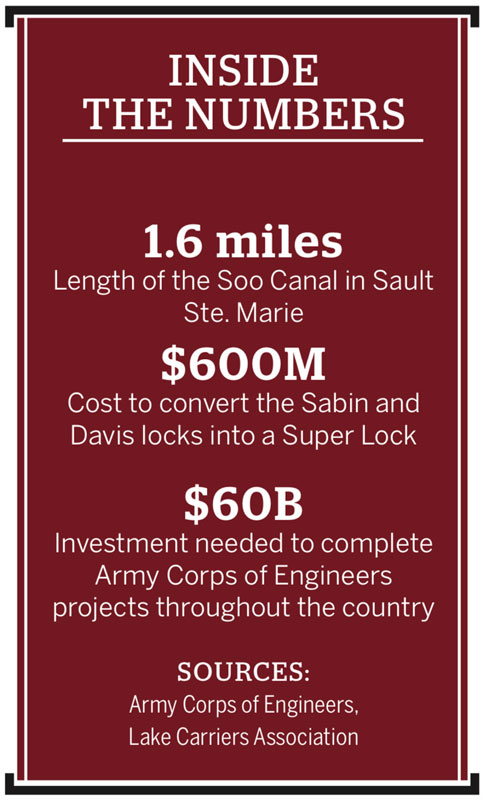 For producers of cars, trucks, homes, and commercial buildings, the Soo Locks are part of a vital trade corridor that has served to drive Michigan’s economy since 1855. But today the shipping channel is showing its age — one of the four locks, Sabin, is no longer used, and the Davis Lock handles minimal traffic. The MacArthur Lock handles ocean-carrying vessels, while the Poe Lock is the only system that accommodates larger lake freighters.

If the Poe had to close for any reason, manufacturers, builders, and other businesses would loose a vital link to iron ore, coal, grain, limestone, and salt. A cost-benefit study commissioned by the U.S. Army Corps of Engineers, which operates the Soo Locks, shows a 30-day closure of the trade corridor would severely impact manufacturing capacity in Michigan and neighboring states.

If that happened, the surrounding rail and road network would be incapable of shipping an estimated 75 million metric tons of cargo that pass through the Soo Locks in an average year, the study shows. To better ensure the Soo Locks’ ability to handle more of the larger lake freighters, in 1986 the U.S. Congress approved a plan to convert the Sabin and Davis passageways into a so-called Super Lock.

Unfortunately, Congress has yet to approve funds to provide for the conversion, and the Army Corps has been slow to request an appropriation of $1.3 million to complete the final study and move the project forward. While industry groups like the Lake Carriers Association have been lobbying Congress to approve the funding, the message has gained little traction, given the Army Corps has a reported backlog of $60 billion in projects.

To reverse the tide, the Snyder administration has been working with the Department
of Homeland Security to complete another study, detailing the economic hardships that would occur if the Soo Locks were no longer open. The study provides another measure of support for moving ahead on a $600-million, decade-long project.

As an alternative, some shipping operators have argued that the private sector should shoulder the financial investment by selling bonds or tapping other loan offerings. It’s unclear how the financial instruments would be backed, given ships pass through the locks at no cost and the margins in the shipping industry are ultra-thin.

Mexico is killing us on trade. This is going to make Detroit look like small potatoes. They’re taking our factories and building these massive plants in Mexico.  — Donald Trump, Republican presidential candidate

As it stands, the consequences of inaction only serve to compound the problem since the vital, 47-year-old Poe Lock requires more annual repairs. By better working together to build a Super Lock, the private and public sectors would ensure the long-term viability of a major trade corridor while providing for economic vitality for years to come.

When President Obama visited Alaska in early September, he tried to make the case that carbon dioxide emissions from coal plants, factories, and automobiles have contributed to “catastrophic” climate change. Such misinformation only serves to strengthen environmental allies as well as set the groundwork for more stringent federal pollution regulations on Michigan and other industrial states. Many of the measures are now subject to court challenges on behalf of businesses.

During his address near Alaska’s Glacier Bay, Obama made the false argument that the receding mass of ice was evidence of global warming caused by humans emitting greenhouse gases. The problem with his logic is that Glacier Bay has been receding since 1750, according to historical records and interviews with the native Huna Tlingit people, who have lived in the area for more than 4,000 years.

In fact, the Huna Tlingit, in order to boost their access to fish and aquatic plant life, have moved their villages whenever the glacier expands or contracts. Going forward, the glacier is projected to expand in the coming decades as the Earth enters a cooling phase. So much for global warming caused by humans.

Rather than rely on misinformation to make the case that more electric cars, solar arrays, and wind turbines are needed to reduce greenhouse gases — the bulk of which are subsidized by the government with no substantive return on investment — politicians must adhere to scientific evidence as the basis for making groundbreaking decisions about our quality of life.

As school districts strive to provide a quality education to students, the nonprofit sector must live within its means or risk laying off teachers and cutting back on programs and services. One way to save money is to eliminate paid release time for union officials. In Michigan, union stewards are allowed to work on union business even as schools pay for all or a portion of their salaries.

According to the Mackinac Center for Public Policy in Midland, taxpayers are paying $3 million more each year so that union officials can attend to union activities while on the school payroll. Rather than requiring union officials to teach full time in the classroom, around 70 of Michigan’s nearly 550 public school districts allow them to work part time or not at all. As a result, many schools hire extra teachers to fill the gap.

At a time when Michigan’s public school districts are struggling to keep pace with other states that provide better educational results with less money, taxpayers can’t afford to pay for ghost employees who offer no contributions in the classroom. For parents who prefer to send their children to public schools versus private institutions, the added cost of paying for union activities is a troubling trend.

To address the problem, Lansing lawmakers should move to end the practice of allowing school districts to pay for union activities. Such a step would provide for more student resources, boost the ability of schools to use the savings to maintain and enhance facilities, and keep unions from benefiting at the expense of taxpayers.