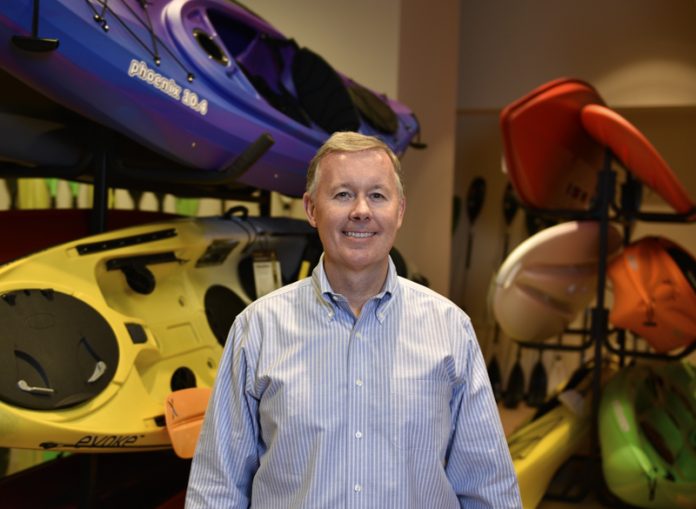 Jim Fox, Hemisphere Design Works’ newly minted CEO, was sifting through piles of data about his company and its industry — recreational kayaking — when he saw something that gave credence to the Muskegon manufacturer’s forecast of double-digit growth through 2020: Youth participation in kayaking has doubled in the last 10 years.

“That’s kind of the Holy Grail for any activity,” says Fox, interviewed two weeks into his tenure at HDW, the world’s largest kayak-maker. “Everybody wants to get youth involved because that’s the future. It sort of sets you up for where the activity is going to be decades from now. It’s really encouraging to see that sort of growth (among) 6- to 17-year-olds.”

The data Fox cited was from the 2018 Outdoor Participation Report, released by the Washington, D.C.-based Outdoor Foundation, which also had other good news for Fox.

To help facilitate a rise in the tide, HDW is consolidating its distribution activities into an 11-acre, 490,000-square-foot facility in Muskegon. The project, expected to be completed by midyear, will add 153 jobs and $9.2 million to the Muskegon area.

According to Fox, finished kayaks by the thousands previously were stored in trailers in the yard around the manufacturing plant. “To have the majority of these in the distribution center, where they can be labeled the way retailers want them and they can be easily moved around with forklifts, should be more efficient than the prior methodology,” he says.

Fox, a collegiate bowler while attending the University of Illinois, took over the reins at HDW in January, when former CEO Chuck Smith stepped down. He brings a wealth of experience in both the water sports and recreation industries to HDW; he spent 26 years with Brunswick Bowling Products before becoming president of the Lowell-based Attwood Marine Products, a leading provider of boating supplies and accessories.

HDW was formed in the spring of 2018, when Michigan-based KL Outdoor united with Quebec’s GSC Technologies. The convergence made HDW the globe’s top kayak-maker, with a stable of brands that comprise an industry-leading 30 percent of the market. Its flagship brands are Sundolphin, Future Beach, Evoke, and Terrain.

The company’s on-land business unit, which includes storage containers, folding tables and chairs, racking, and closet-organizing products, is based in Quebec.

The former KL Outdoor was founded in 1982 by Kenneth Harris and has been based in Muskegon since 1989.