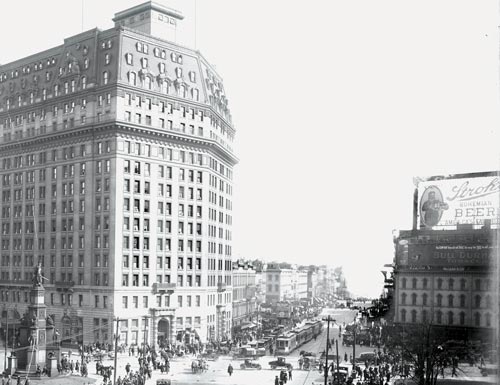 The meeting in the old Penobscot Building’s public reception room wasn’t going well. Henry Ford, Billy Durant, Benjamin Briscoe, and R.E. Olds had convened on Jan. 17, 1908, to explore a big automotive merger. “The room was small, no place to discuss business,” recalled Durant. “I sensed, unless we ran to cover, plenty of undesirable publicity in the offing.”

So these automotive pioneers and their associates moved over to Durant’s “commodious quarters” at the Pontchartrain Hotel.

Although the merger of the Ford, Buick, Maxwell-Briscoe, and REO companies never worked out, the Pontchartrain became established as “the mother of motors,” according to George Stark, author of In Old Detroit. Its bar served as a laboratory where men demonstrated components and studied blueprints. Pontchartrain bartender Peter Drexelius even remembered when Albert Champion showed off his new porcelain spark plug to one and all.

“More history was enacted within its walls in its brief, spectacular career than any other hostelry in these parts,” Stark wrote. In fact, Ford’s first advertising director, E. LeRoy Pelletier, told hotel manager William Chittenden Jr. to roll up the lobby’s rug, paint a red circle, and within it write, “The heart of the auto industry.”

Construction of the Pontchartrain, on Cadillac Square at Woodward Avenue, began in the spring of 1906, with completion planned for a year later. The site was dedicated to hotels even before 1857, when the six-story Russell House emerged as one of Detroit’s principal establishments. The Prince of Wales, later to become King Edward VII, stayed there in 1859, and Russia’s Grand Duke Alexis followed in 1870.

When the Russell House was knocked down to make way for the Pontchartrain, the property, owned by the estate of Dr. E.M. Clark, was worth $700,000. The Detroit News reported that Westinghouse, Church, Kerr & Co. used 125 men and 20 teams and wagons to excavate 18,000 cubic yards of earth. Construction costs, financed by heirs of the late Sen. James McMillan, totaled a cool $1 million.

Pilings to support the foundation were driven through wet clay to a depth of 75 feet. Upon them, builders poured 42 inches of reinforced concrete. The 10-story building arising from this base incorporated an advanced ventilation system and passenger elevators “of handsome design and very swift.”

Besides auto magnates, the bar was important to politicians: Mayor Oscar Marx (1913-18) and councilmen drank there so frequently, it earned the nickname City Hall Annex.

After a five-story expansion in 1909, the Pontchartrain offered nearly 400 rooms, but its attractive furnishings fell out of favor by 1915 due to the new “modern” Statler Hotel.

Meanwhile, that April, the Detroit Athletic Club opened up at Madison and Randolph and became “the grand lodge of the automobile business,” as Malcolm W. Bingay put it.

In 1919, First National Bank paid between $4 and $5 million to end the Pontchartrain’s struggles, tearing it down in 1920 for a fresh Albert Kahn-designed building. Forty-three years passed before a new hotel on Jefferson Avenue was christened Pontchartrain. It closed in 2009 but reopened four years later as the Crowne Plaza Pontchartrain, regenerating the greatest and most loved name in the history of Detroit’s hotel industry. db