By day, the Quadrobot U1, a four-wheel-drive electric vehicle, can deliver or accept mail, offer retail goods for sale, serve as a medical clinic, or provide other services. In the evening, say on an urban street corner, the autonomous micro van could be converted into a deejay booth, complete with a mixing board and heart-pumping speakers.

Designed — and now being built — at an assembly plant in Madison Heights, the Quadrobot U1 is the brainchild of Mike Tang, a native of China who came to Detroit to earn an art degree from the College for Creative Studies. Following graduation, he worked on various programs for SRT and the Dodge Viper at FCA US in Auburn Hills. 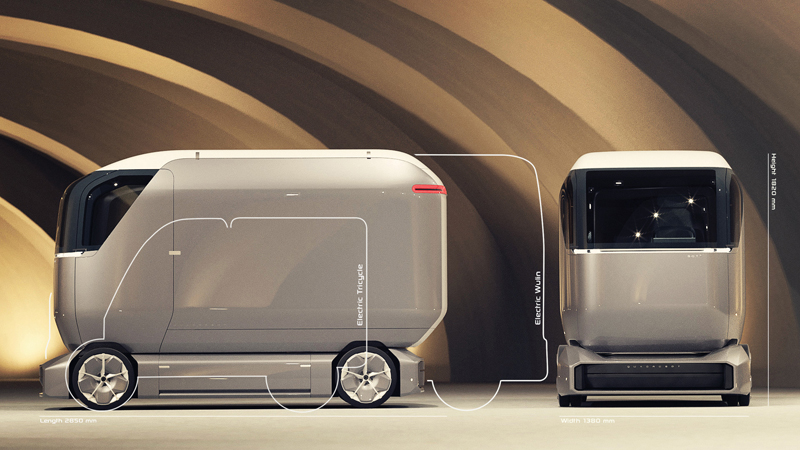 “I wanted to design something that was an electric vehicle from the start, not a design where you start with a traditional car and a gas engine,” says Tang, CEO of Quadrobot Inc. “We started in 2017, and we have an order for 2,000 vehicles, mostly from the postal service in China. They want to use them to deliver mail — or the U1 could be parked on a sidewalk and people could drop off or pick up mail.”

Wang says the vehicle has swappable designs for the chassis and body, while the battery pack offers 35 kilowatts of power. The battery can deliver up to 47 horsepower, and has a range of 200 miles on a single charge. Its maximum speed is 50 mph. The U1 can be leased for around $200 a month, although in the future it may be available for purchase.

“In addition to the lease there’s a user fee, and clients agree to share their data so we can learn how the vehicle is being used and how we can make it better,” Wang says. “You can also order the vehicle to come to you with an app. We see the best uses in urban areas, but they could service rural people who often come to a small downtown to take care of their mail or buy retail goods.”

The U1 — 1.8 meters high, 1.4 meters wide, and nearly 3 meters in length — isn’t designed to accommodate a family on vacation, but that same family could access the vehicle at a hotel, on a street corner, or in an entertainment district. “It could be a deejay booth, a mobile vending machine, or almost anything you could think of,” Wang says.

The company has 10 employees in Madison Heights, and another 30 workers in China (north of Shanghai). By the end of the year, Quadrobot plans to have 100 total employees. Next year, a passenger vehicle is set to debut. In 2020, the enterprise plans to sell 30,000 vehicles, and it’s aiming to sell 100,000 units in 2022.

“The U1 fills niches in the service economy,” says Joseph Buick, vice chairman of Quadrobot. “I got involved because the U1 is at the cutting edge of autonomous, electric-powered vehicles. My background is in the retail and wholesale space, and our family has long been in the automotive business.”

The great-great nephew of David Dunbar Buick, who founded Buick Motor Co. in 1903, Buick says his last name helps open doors in China, as the automaker was one of the first to embrace the Asian-Pacific market. “The Buick name is very well-known in China, and I get questions about it all the time,” he says.

Buick points out the Q1 can be plugged into an outlet, which would allow the vehicle to be in service for multiple hours. It also can be outfitted as a 24-hour locker box. Once an order for, say, a pair of shoes is fulfilled online, an app asks if the buyer wants to pick them up or have them delivered. The outer shell, which is made from composite material, is secure and can be easily branded.

“We wanted to make the vehicle in Detroit, to play off the city’s brand and the city’s heritage, and maximize the supply chain,” Wang says. “You can go to other cities and build this vehicle, but few other places have the resources and connections to integrate everything you need to build a vehicle.”